FC Bengaluru United started strongly, trying to take control of the possession early on. They worked hard to create a few chances – six minutes into the game, Manvir Singh crossed the ball in; after a brief scrimmage, the ball reached Mohamed Kdouh, whose shot on goal sailed high above the bar. In the 14th minute, Shajan tried to make the most of a loose ball only to have it saved by the Roots FC keeper.

FC Bengaluru United continued to pile on the pressure and attack and the shackles finally broke in the 21st minute. A long throw-in from Praful Kumar was smartly manoeuvred into the goal by Jairo to give FCBU the lead. FCBU continued to create chances; in the 43rd minute a short corner from Manoj Kannan was headed by Jairo towards the goal, only to see it narrowly miss. FCBU went into halftime leading 1-0, having controlled most of the game thus far, Roots FC having only one clear chance - a testimony to how FCBU were strong both in attack and defence.

It was a similar script in the second half, with FCBU setting up chances from the start. Three minutes in, a cross from Aenam Jyrwa set up a clear shot for Selwyn Miranda, only to see his diving header sail high over the bar; soon after an attempt from Shajan from outside the box sailed over the goal. In the 59th minute, Aenam’s cross into the box was misjudged by the Roots FC defender to set up an easy finish for Franklin to get FCBU up 2-0. FCBU continued to press on, controlling possession, and soon enough, in the 84th minute, it was Jairo again, making the most of a Rakesh Pradhan freekick to head the ball in and score his second goal of the match and push FCBU up 3-0. 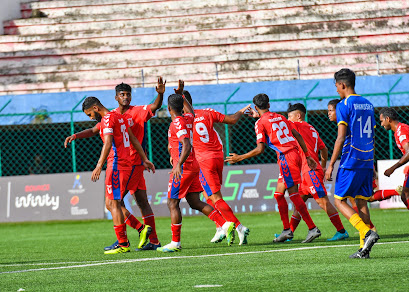 Posted by diegostrikes at 7:38 PM