Unbeaten FCBU vie for a hat-trick of titles

FCBU Media
The stage is set for a thrilling finale as FC Bengaluru United look to secure a remarkable third consecutive BDFA Super Division title in their last match of the campaign this season. The defending champions, who are placed second on the points table, are currently undefeated and carry with them strong momentum as they look set to take on last year’s runners-up, Kickstart FC, on the 10th of December at the Bangalore Football Stadium.
FCBU, who have 45 points from 17 games and the highest goal difference (56) in the league, currently trail Sporting Club De Bengaluru (who have finished their season) by just one point. Kickstart FC, who are currently on 39 points from 17 games have secured third place for themselves. FC Bengaluru United fans will be hopeful that their team can recreate their exploits from last season, where they clinched the title in a 1-0 thriller against Kickstart FC on the final day. A loss for FCBU will ensure Sporting Club De Bengaluru will secure the title in their debut season.
FCBU have been in strong form this season, scoring a whopping 65 goals in 18 games, while only conceding on nine occasions. In front of the goal, new signings Mohamed Kdouh and Irfan Yadwad have been the stars with 12 and 14 goals respectively. Aenam K Jyrwa has also been proficient with seven assists, while Brazilian defender, Jairo Rodrigues has displayed phenomenal defensive acumen along with an attacking flair, scoring six goals as well.
“We are excited and looking forward to rising to the challenge in the final game,” said Gaurav Manchanda, Owner, FC Bengaluru United. “Our boys have displayed stellar form this season and I look forward to them ending the season on a victorious note.”
FC Bengaluru United are all set to compete in the I-League Qualifiers early next year, and a third consecutive crown will be a welcome morale booster for Khalid Jamil’s men before the competition. 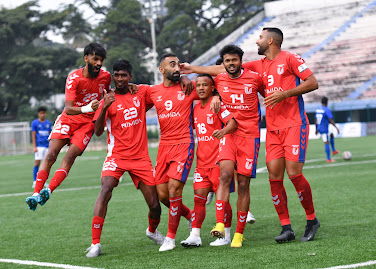 Posted by diegostrikes at 8:31 PM