HAL move on to I-League division 1

Great news for the football lovers of the garden city! Next year’s football season will not be a dull and boring affair. The aircraftsmen make the cut, move on to the elite division, and bring Bangalore once again in the Indian football map. 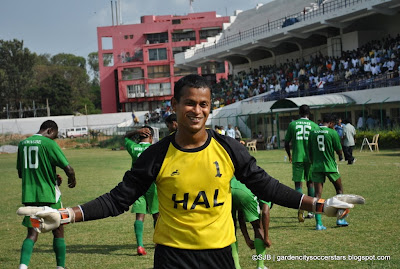 Right from the beginning of the final phase, HAL was on the right track. It was coming alright; however, they have to wait till the last match and some anxious moments to make it happen.

Elated HAL coach, Muralidharan, finally thanked his players for bringing HAL to the top division of I-league. It was a dream he saw when he took the charge of this team some 2 seasons back. 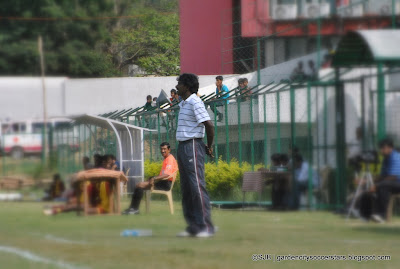 HAL only needed a draw to make the cut. The game started in a very similar fashion, playing from left to right HAL tried to keep the possession of the ball. They were tad cautious; failed to make any positive attack in the first 30 minute. Xavier, who had an off-day today, messed-up in few occasions!

Sesa wards took the advantage of a complacent HAL defense - striker Israil Gurung passed a good cross for Selwyn Fernandes, the later was left unmarked, and scored the goal from a header.

Perhaps this jolt was needed for HAL to come back into the game. They looked little frustrated on their campaign - making some silly challenges and getting booked by the official. 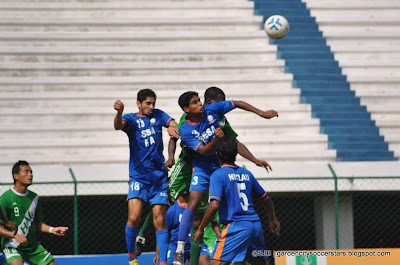 When everyone thought that HAL would leave the pitch with a one-goal deficit in the lemon break, it was again Satish Kumar jr brought the aircraftsmen into the game. 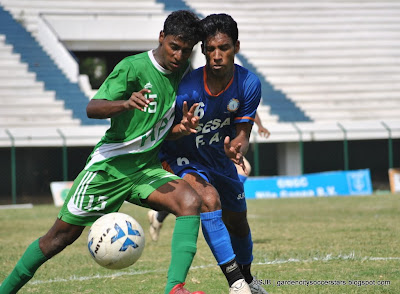 The much awaited equalizer came from a nice move initiated by medio Jotin Singh – Jotin puts the ball for Xavier on the right flank, he receives and puts for Satish Kumar jr in the middle, Satish plays and quick one-one with Murali, and finally sends an accurate curling left-footed shot into the top-right corner of the net from out side the penalty box.

Making a comeback in the I-League division 1, HAL expects to make a competent team. Coach Muralidharan, has eyed on few promising players from Vasco and Malabar United. HAL sports secretary JoPaul Rajan assured about conforming to the AFC guidelines as per schedule. About retaining HAL talents from migrating to other top Indian clubs, Rajan said, “Being a public sector enterprise, we’ve certain limitation on shelling out big amount. We’ll try to get them into HAL roll for a secured life”.
I-league division 2 truly has been a flavor for the public sector teams. Other day ONGC qualified for the first time in I-league division 1 and now HAL re-enters in the big league. Ditto otherwise for the teams like Mohammedan Sporting and Vasco. The once regular in the I-league top division, these teams performed below par, and will fight from the qualifying stages in the next edition.

A disappointed Vasco, who already knew their fate before taking the field for the final match, played a 1-1 draw against hapless Vasco Mohammedan Sporting. Joel Sequeira gave Vasco the lead in the first-half. Later Sporting captain, Jothi Kumar drew-level in the 67th minute.