In a spectacular display of football, city giant HAL upset Mohammedan Sporting’s I-league division 1 plan with a 4 goal victory. In the other match played earlier today, Vasco defeated hapless NISA with a 2-0. 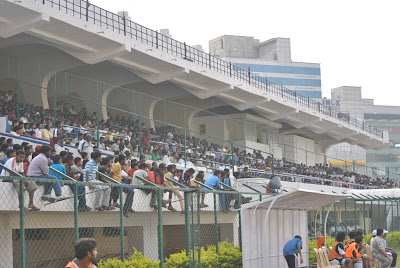 More than 10,000 football lovers turned out to witness this super Sunday game and shouted their heart out for their favorite team. HAL fans surely got their money’s worth as they saw many exhilarating moments in the match including a breathtaking goal by Xavier Vijaykumar. 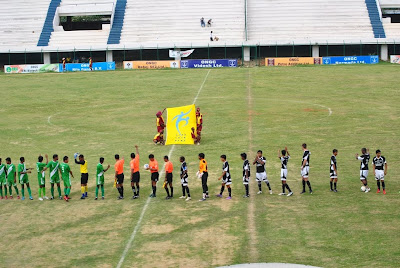 If the first 25 minutes if the match belonged to Mohammedan, the rest essentially belonged to HAL! They scored 4 and came close to scoring another 4 in the match. 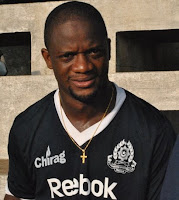 HAL made the first advance in the 4th minute of the match by a nice move from skipper Rajendra Prasad to Fredrick, the later shot was thwarted by a nice reflex from keeper Naseem Akhtar.

Showing urgency, Mohammedan made some quick raid to the opponent’s defense. In 20th minute, Edu received a brilliant pass which was cleared by a HAL defender for corner. Dead-ball expert Edu’s, corner shot not cleared by the HAL defense; Theo gets the ball in the muddle, and finally scores for his team.

After conceding the goal, HAL was trying hard to get back to the game. Satish Kumar (junior) set some good balls for his mates, which was wasted by Murali and Fredrick.

In 34th minute, Xavier’s harmless thru from the top of the penalty box was missed by the sporting defender, lucky to receive, Fredrick fails to put the ball on the right spot, and finally goalkeeper Naseem Akhtar saves it. 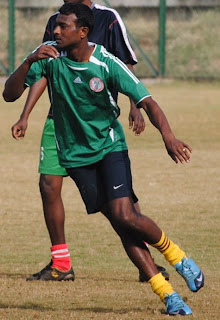 2 minutes later, the action was again centered on Xavier, who takes a classic curling left-footed shot from the right-corner of the box. The shot was so accurately dipped into the far post that the fully-stretched keeper couldn’t reach near the ball.

Thought HAL strikers made mess from some crucial moves, the equalizer was an outcome of continuous pressure from their end.

After changing ends, Sporting made some quick attacks, however, their strikers were heavily marked and failed to penetrate to the striking zone.

HAL took lead the in the 52nd minute - defender Anupam Sarkar’s sloppy defending proved costly as Nigerian Fredrick gained from the mistake, with no one to challenge him, he ran all alone with the ball, and placed it to the top-left corner of the net. Mohammedan Sporting keeper could not do much here. 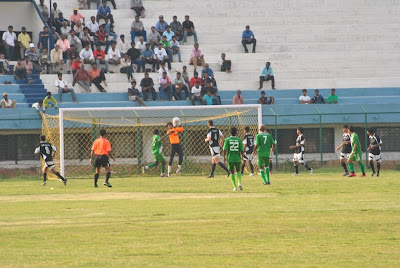 Meanwhile, Brazillian Edu was doing what he is best known for – trying his luck on set-pieces and putting good crosses. However, Mohammedan lacked the eagerness to work out from the ground passes, and seldom were they given space by the HAL defense.

In 76th minute, Edu’s in-swerving free-kick from a foul near the right-side of the corner was somehow foiled by Amar Deb for a corner. The corner proved futile for Mohammedan and HAL made a quick counter attack. Seems no one from the Mohammedan defense could pick Xavier, and the came out scoring his 2nd (teams 3rd) goal of the match. 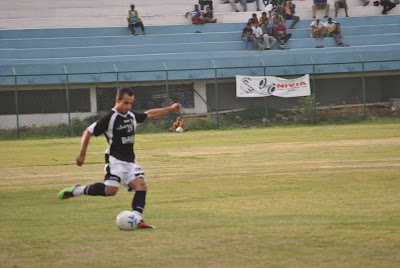 Mohammedan brought in veteran striker Dipendu Biswas and attacking mid-fielder Niledra Diwan from the reserve, however their introduction made hardly any difference for Mohammedan.

The real hero for HAL was definitely Satish Kumar (junior), his speedy runs from the left flank and then cutting inside the box created havoc in Mohammedan defense.

Murali made a mess of the situation in the 87th minute of the match – Xavier did well to cover a lot of ground and then passed to Murali, the later only had the keeper in front of him, rather than placing the ball, he took a wild shot that went above the goal spot. A minute later, another Murali shot was splendidly saved by Naseem Akhtar.

The climax was rightly kept for the last minute of the match. Another cross from Satish Kumar (junior) went for Xavier, goal keeper came out from the goal line, and charged the ball. The keeper missed the ball and it was out of his reach. Xavier only needed to push the ball, however, a niggling sprain deprived his from doing so, and Naseem came out and cleared the ball. Unfortunately for Mohammedan Sporting, the ball felled right front the skipper Rajendra Prasad. Looking that the keeper is out of his position, Rajendra Prasad accurately lobbed the ball to the goal, much to the delight of the thousands of crowd.

Shabbir Ali, coach, Mohammedan Sporting: Truly disappointed, played very horrible game today. Makes our task really difficult! Now, even a draw today would have placed us in a better position. It’s difficult from now on. Though we’ve played with the tougher teams and we’ll play with the relatively weak teams, we’ve a challenging task to cut out.

Muralidharan, coach, HAL: We went out with a strategy and played as per our plans. Glad to say that all the players played their role and executed in perfection.

Xavier VijayKumar, veteran player, HAL: Great win for us, Md. Sporting is a strong team, winning by a big margin has lifted our moral, and that will help us for the rest of the matches. All the counter attacks were a part of the plan, and glad that it yielded result.
I do no have any intention to captain my team for now, there is less pressure, I'm enjoying it, and it is being reflected in my game.