Mohammedan made a heavy weather of defeating bottom-ranked Sesa by 2-1. Theo and defender Debkumar Sashmal scored a goal each in either half. Jaiganesh Koltekar scored one for Sesa in the 2nd half. In an earlier rather 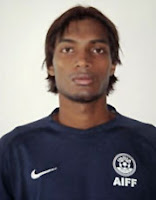 entertaining match played today, ONGC brightened their position to qualify for the final round by bulldozing the other public sector team, Oil India 4-1.
National team striker, Tarif Ahmed scored the first hat-trick of the final edition.

Lagging 4th behind HAL, ONGC, and Vasco, Mohammedan needed to win this match in a convincing fashion to stay in contention for promotion. Mohammedan scored the first goal in the 38th minute in Liberian Theodore.

Both the teams opened up many chances and missed as many in the game. In the early second-half, Sesa came back into the game by a goal from rookie Jaiganesh Koltekar. 5 minutes after the equalizer, Theo took the ball from the left flank and penetrated inside the box, Jothikumar who was rightly-positioned, failed to connect the ball properly.

In the 59th minute, substitute Nilendra Deewan took a horrible wide shot away from the goal. It came to him from a deflection from Theo’s shot, which was perfectly floated from the right-flank.

Sesa striker Israil Gurung, who broke an off-side trap, was set alone with the keeper in the front in the 68th minute. However, he was tripped down by defender Samuel Shore at the top of the penalty box. Mid-fielder, Prathesh Shirodkar’s free kick was shot wide.

Mohammedan took the lead in 79th minute, Edu was cutting in dangerously

from the left flank until the defender cleared it for corner. Edu took the corner that was meant for Theo, which the later closely missed, finally opportunistic defender Debkumar Sashmal who closely followed and placed the ball into the goal.

Sesa later came back and started pressurizing Mohammedan defense, but failed to keep the ball into the goal-area.

seen my team playing so badly. I thought we would pull this out easily, but it turned otherwise. Other challenge is that two important players are out for the next match due to double booking. Don’t have options in all departments; have to shuffle the playing positions.

Theodore Sunday Wrobeh, scorer, Mohammedan Sporting: We’ve won today, and there are 3 more rounds to play, so all is not lost, we need to come well in the remaining matches..