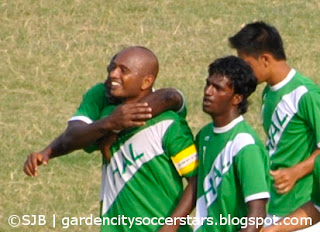 The mariners failed to come out of the jinx of the Aircraftsmen and ended their Bangalore campaign in 1-1 draw. A brilliant strike from Surkumar Singh gave Mohun Bagan the lead in the 30th minute of the match, J Murali was quick enough to equalize for HAL, and with both teams failing to get past the goalkeeper the game ended in the same result.

It was the 3rd consecutive draw for the Subhas Bhowmik’s ward and the HAL boys have every reason to be happy as they remain unbeaten to Bagan in this season.

Mohun Bagan started well with Chiddi and Muritala giving jitters to the opponents’ defense.  The goal seemed to be coming just in a matter of time. Surkumar Singh came up with a brilliant swerving long ranger. The ball was precisely placed at the corner of the goal that was beyond the reach of HAL goalkeeper.

HAL captain J Murali cut short the joy for the Bagan fans when he equalized from a pass from R C Prakash. Murali took a ground shot at the far post beyond Sangram’s reach. 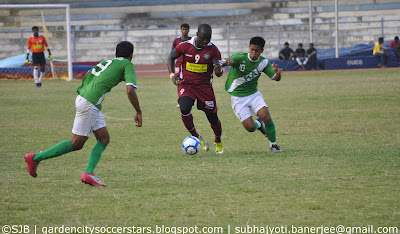 After replacing Ishfaq Ahmed in the second half, Satish Kr. Jr. displayed his class when ran down from the right flank after dribbling past couple of HAL defenders. TD Bhowmik rates him highly, he feels that Satish needs to harness his skills and has a bright future. 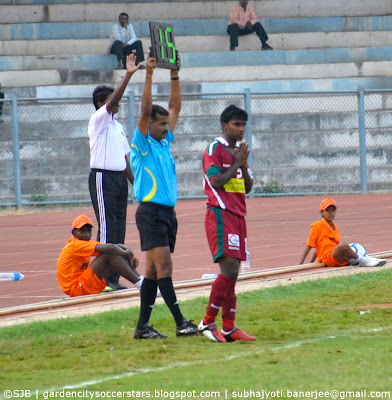 Captain Murali was today’s man of the match.

HAL manager M Muralidharan was a happy man, “We played as a team today and looked like were playing good match.” Muralidharan added, “Everybody carried out their role as per plan, today’s performance was much better, and this can be termed as the best home match so far.”

After the match, TD Bhowmik stressed the importance of Baretto-element for the team, “I missed him as a player and more than that today the team missed a leader in Barretto.”

The coach lauded his team for performing well in such a bad football pitch and seemed content with the fact that no one got injured, “With such hard and bounce, this ground is ideal for knee injury”, added the coach.
Posted by diegostrikes at 12:31 AM