The jinx is finally broken and HAL can win home match! After struggling in the first half, HAL displayed brilliant attacking prowess in the later half, and earned much needed full points from their home encounter. 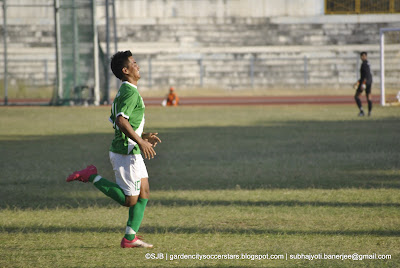 I-league is now half-way thru, after this win today, HAL stand in the 9th position in the points table. Certainly few notches to go before they avoid relegation scare. ONGC looks hapless at the bottom of the points table. However, their coach hopes to make amends and turn the table in the return leg. 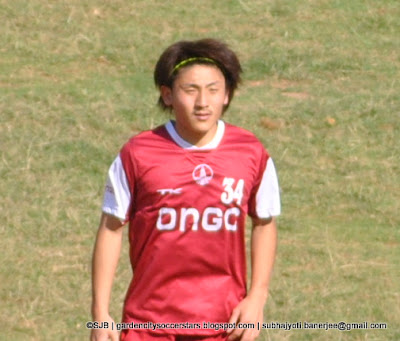 ONGC's new Asian recruit, Japanese Katsumi Yusa did not had a decent outing

ONGC looked impressive in the first half, they were pretty close to scoring. Striker Babatunde with able support from Jatin Singh in the midfield jolted HAL defense. HAL was looking very ordinary, with no one able to hold the half line, they missed several dead ball situations. 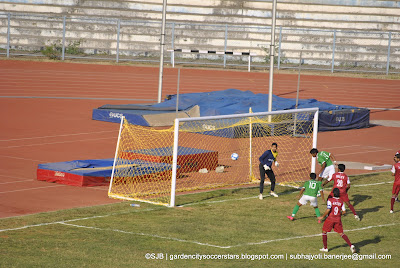 RC Prakash's goal was ruled out due to offside

HAL returned in the second half with a purpose, they raided ONGC defense at regular interval. The goal came in the 70th minute of the match. Vijesh Kumar’s passed for Maleng, Maleng grounded the ball thru his chest, and then took a superb shot to the goal. ONGC custodian was taken by surprise and could not do much except looking at the ball going towards the goal. 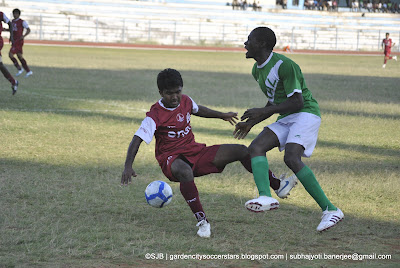 Hamza fouled after trying to break thru Ricky Joy's defense


Last few minutes of the match belonged to the oilmen. Some elementary mistake from defender Lilian  Kenneth almost fetched ONGC a goal. Rohit Chand timely intercepted and foiled the attack. 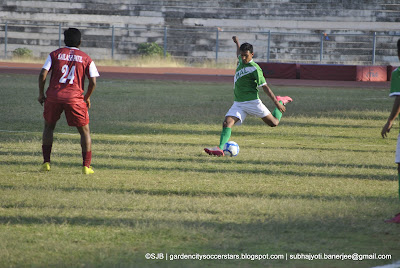 Rohit Chand had a great day in office


ONGC coach, Subrata Bhattacharya, popularly known as PotlaDa, was all praise for the HAL defense, he was pretty impressed by the way the HAL defenders tackled ONGC’s two Nigerian strikers. Also, he failed to understand the way his strikers gave way to score after getting so close. 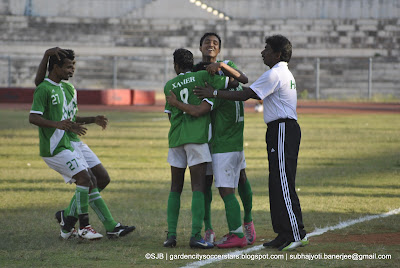 A hug from the manager and teammates
HAL manager Muralidharan looked happy after this win, he believes his team will display much better performance in the next matches. Also, hopes to get a foreigner registered in the current transfer window, one Brazilian is coming for trial in few days.

HAL will take 10th placed JCT in their next round match at the same venue on Saturday, February 12.

Posted by diegostrikes at 12:14 AM