A R Khaleel was elected again as the President of KSFA at the AGM today, at Bangalore Football Stadium. Khaleel has been the office bearer of KSFA for 6 decades in various capacities.
Also, Khaleel saab as he is popularly known doubles up as the Vice President of AIFF Executive Committee for the 2009-12 period.

Post AGM, the Governing Board (GB) assembled at the KSFA board room to elect the KSFA office bearers for term of 2 years. The KSFA bodies stressed on running the state-level football in a professional way and uplift the grass-root level. 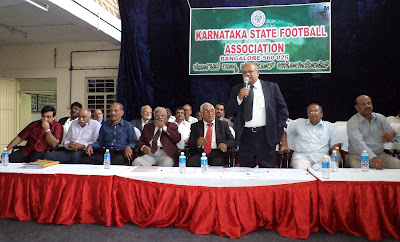 The following individuals are elected as GB Members from Life Members to KSFA
The following office bearers are re-elected unanimously:


Posted by diegostrikes at 6:39 PM