Defending Champions came back from a goal down to retain the Women’s SAFF Championship when they defeated Nepal 3-1 in the SAFF Women’s Championship Final today.

Down by a third minute goal scored by Nepal’s Dipa Adhikari, Supriya Rout Roy restored parity for India five minutes later. Both the teams were locked 1-1 at the interval. Changing over, India doubled the score in the 64th minute through Bem Bem Devi. Kamala Devi completed the rout in the 87th minute.

Bem Bem Devi and her gang might have scored at an average of 6.6 goals per match, however, they played against much weaker teams from the South Asian region. India is ranked 52nd in world, Bangladesh perhaps comes closer with 115 rank, rest - Sri Lanka, Bhutan, Afghanistan, Nepal, at cellar position of 128.The step going forward is to create impact at Asian-level.

In a message, Mr. Praful Patel, President of AIFF hailed the performance of the team. “The Women’s team displayed exemplary character both on and off the field as they breezed past every obstacle on the way. I congratulate the players and support staff for the achievement,” he said.

Mr. Kushal Das, General Secretary, AIFF, also had a word of praise for the winning squad. “The AIFF left no stone unturned for the preparation of Women’s Team and the results are in front of us. I congratulate the team for the success.”

“Football in India is on the rise. AIFF’s aim stays to popularise the sport among the women. I’m sure the result will go a long way in inspiring a new generation to take up the sport,” he added.

AIFF might have left no stones unturned for the built-up to this tourney, however, one need to really understand the condition of women's football in India.

How many states/cities hosts league regularly? Where is a league at the National-level? How many domestic tournament these girls gets to play in a year round?

There's no women's league in Bangalore, sure the situation is same even in most of the football-popular Indian cities/states.

Lets hope this win will help the cause! 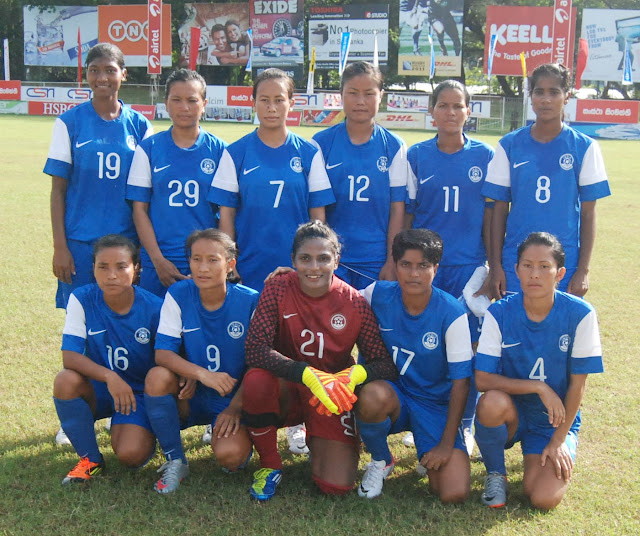 Posted by diegostrikes at 7:22 PM