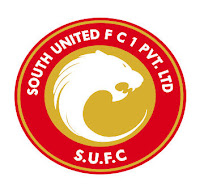 The match was tied 2-2 at full time. Striker Stephen scored both the goals for South United. They shot all the goals in tie-break and the score went 5-all. Finally,  in sudden-death, PPFCA's failed to score making making South United the worthy champ!


Tuesday, November 20, 2012, 11 am: South United  stormed into the final of Kedari Redekar Cup at Gadhinglaj, Kolhapur. Playing against Pune based DSK Shivajians today morning, the Bangalore-based club shot 3-0. Amoes, Murugappan, and Madhukaran scored a goal each.

The team will now play against Peninsula Pune FC Academy (PPFCA) in the Finals later today. In the other semifinal, PPFCA defeated Gadhinglaj United 1-0.

The tournament got delayed by a day owing to the death of Balasaheb Thakare. South United will be playing their semifinal match tomorrow morning.
Posted by diegostrikes at 12:20 PM