In a heavily altered starting XI, one having no foreigners and with Sunday’s big game against Salgaocar gaining rightful precedence, Ashley Westwood handed 18-year-old Nishu Kumar his club debut while Lalthuammawia Ralte started in goal. In fact, the squad did not feature Sunil Chhetri, Eugeneson Lyngdoh, John Johnson, Rino Anto and Curtis Osano while Michael Collins missed the fixture with a suspension.

But the young side showed no signs of pressure and put Ayeyawady on the back foot with a flurry of attacks from the first minute on. Daniel Lalhlimpuia was set up smartly by Vineeth in the box and the youngster’s dragged attempt from close ricocheted off the crossbar. Alwyn George, Len Doungel and Vineeth then all came close with chances they should have finished off.

Bengaluru eventually got the lead in the 20th minute when Vineeth made the most of a poor back pass, got a touch to put the ball beyond an onrushing Ayeyawady ’keeper before regain his shape and slotting into an empty net.
But for all their domination, Bengaluru’s failure to take their chances – some of them more than gilt-edged – saw them pay the price a minute before half-time. Christopher Chizoba forced Manju to commit and then set Zaw whose strike beat Ralte past his right as the half ended 1-1.

Westwood didn’t press any changes to start the second half with and Bengaluru shot into the lead when George tapped home his first goal in a Blues shirt in the 61st minute. Meeting a low cross from Vishal Kumar, George saw his first take saved by Vanlal only to get a second chance that he put away.

Vineeth then set up Doungel in the 66th minute to make it 3-1. Picking the ball on the left, Doungel powered his way past his marker before shooting past Vanlal with his left.
Just when Bengaluru felt they had a lead that would let them breathe easy, an impressive display from Chizoba seemed to throw a spanner in their works. Picking up the ball 20 yards from goal, the Nigerian striker cut past a covering Vishal Kumar and then lashed a fierce grounder which beat Ralte’s flailing hands and gave the side from Myanmar a glimmer of hope.

Just nine minutes later, an optimistic effort from the edge of the box along the carpet, something which Ralte should have gobbled up, inexplicably evaded the Bengaluru ‘keeper’s grasp, deflecting off his hands and into the goal, restoring parity for Ayeyawady.

It was easy for heads to drop in the hosts’ camp but an inspired run from Vineeth down the left saw him power past his marker and put in another rapid, low cross which a sliding Beikhokhei Beingaichho bundled in.

Having regained the lead and with just a minute of regulation time remaining, the Blues went for the kill as Udanta Singh, substituted in for Doungel, left two Ayeyawady central defenders trailing in his wake. With only the goalkeeper to beat, Udanta hammered his shot into the body of the keeper but Alwyn George reprieved the youngster, smashing the ball into the roof of the net to give his side a 5-3 lead and the three valuable points. 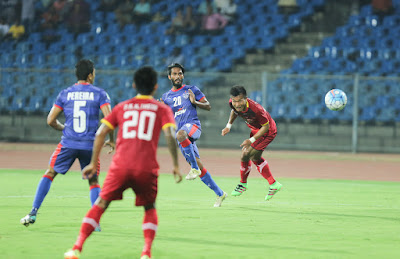 Posted by diegostrikes at 11:15 PM