In an important Round 16 fixture of the Hero I-League, title contenders from the Garden City Bengaluru FC will be meeting Kingfisher East Bengal at their Fortress tomorrow. Having played equal number of matches, the team from Kolkata is currently ranked third in the points table, only two points behind Bengaluru.

Hero I-League has never been so interesting as it's a two-team title race now between Bengaluru FC and Kingfisher East Bengal after Mohun Bagan's 3-3 draw with DSK Shivajians tonight.

Bengaluru is back home after a 1-1 away draw against DSK Shivajians. However, the result didn’t perturbed much gaffer Ashley Westwood, who reckon the latter is a much improved side having unbeaten in last 5 games.

The only worry for gaffer is the backbone in defense, John Johnson’s absence for tomorrow’s match. The former Middleborough central defender sits out tomorrow due to yellow card suspension.

Johnson’s partner, Curtis Osano, who too is on three yellow cards will start the game with a new partner. Having played against the likes of Ranty Martins and co. in last few seasons, he no pushover.

Other than the Shankar Sampangiraj’s injury, who’s out for the rest of the season, Bengaluru have no other injury problems.

Ashley looked calm, he said, “Tomorrow’s match will not decide the title, we can still do with one draw and two win in the remaining three rounds.”

Result of East Bengal in last five rounds read two away loss and a win, then a morale boosting derby win and a disappointing home draw. East Bengal might not have set the combination right yet they are in the champion’s race.

For Kingfisher East Bengal coach and former India international Biswajeet Bhattacharya, it is a must win game to stay in title contention.

“Tomorrow’s game is important game for both teams, Bengaluru FC is a good team, they are in good position, and we are also in the run. We are very serious, we believe in our boys, and we have to go for a win”, said East Bengal coach.

Biswajeet further added about his team’s late upsurge, “Football is full of surprises, you win some you lose some. When we met Bengaluru at home in Round 5, we were seven points behind and in round 9 and 10 we were trailing by five points. If you see now (Round 16), we are just two points less, and it can be anybody’s game tomorrow.

The latest news from East Bengal camp is that their central defender. Arnab Mondal will be serving two-match suspension, he can’t play tomorrow.

That might prompt Biswajeet to field experienced Deepak Mondal against Bengaluru. Mondal, a 1998 Tata Football Academy product, the mainstay in defense is playing his 16th season in I-League/National Football League uninterrupted.

Deepak accompanied his coach in the pre-match press conference today.

Asking how long he would be playing at the top level, Deepak answered cheekily, “If I am fit, I will keep going. Most important for me is to get a platform to perform, if I get a club like this, I can play for few more seasons."

Despite of having talented players in their rooster, East Bengal could not strike a right combination thus far, yet on the positive side they are still in the title race.

The match will be played tomorrow at 7:05 PM, Sree Kanteerava Stadium, Bengaluru, Karnataka. 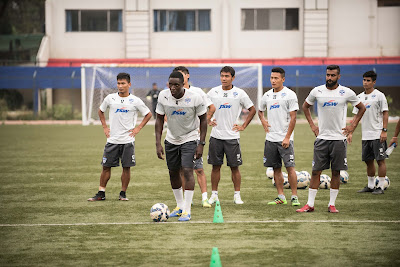