Playing a woeful game of catch up, Ozone faltered again at home in the hand of Fateh Hyderabad AFC. The visitors scored two quick goals in the first half, owing to some poor defending from Ozone backs.

In a match where both teams needed to win to retain chance to qualify to the next stage, Fateh took the lead in the third minute from a goal from Nima Tamang. They struck again in the 23rd minute from a cross from Bangalore boy Manoj Swamy Kannan which Bonison Singh made no mistake.

Anto Xavier reduced the margin for Ozone in the 40th minute.

With the inclusion of Satish Kumar and Vignesh G in the fisrt half, Ozone tried come back to the game. However, they failed to crack Fateh defense.

With 7 points and an away game in hand, Ozone are out of I-League Second Division. They currently stands at 3rd position in Group C after Fateh Hyderabad AFC and Kenkre FC. 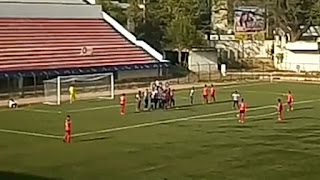 Posted by diegostrikes at 6:27 PM