Bengaluru FC keen on steadier show ahead of DSK challenge

Albert Roca called his Bengaluru FC side to iron out the creases and keep things tight as the Blues ready to take on DSK Shivajians in a Group B clash of the Federation Cup, at the Barabati Stadium, in Cuttack, on Wednesday.

Bengaluru got their campaign off to a winning start with a 3-2 defeat of Shillong Lajong on Monday but made things harder than they needed be after coasting to a 2-0 lead. And Roca believes the margin for error will keep getting lesser as the tournament progresses. “We let our guard down after getting a two-goal lead and we were almost made to pay for it. We’re happy we could come away with a win and take a lesson back with us on not letting things slip when we are in control. We’re going to have to be very cautious against DSK because one small lapse can affect how your tournament pans out,” said Roca.

DSK suffered a 4-0 defeat to Mohun Bagan in their Cup opener and while they would be keen on their first points in the tournament, the Dave Rogers-coached side will also look to set right their 7-0 defeat at the hands of the Blues only a fortnight ago in the League.

“We cannot ride on the fact that we beat DSK by a heavy margin. I said in the press conference after that game that while the result was good, it’s not one that we will be talking about the next day. The slate is clean on Wednesday and we will have to earn our points.”

The Blues suffered a minor blip when John Johnson had to be substituted at the start of the second half with a thigh injury and Roca said he is in constant touch with the medical team with updates before he decides if the English defender will take the pitch against DSK or not. Goalkeeper Amrinder Singh who sat out of the win over Lajong with fever will also be a late decision for selection.

Roca will have a lot of positives to take back from the win against Lajong. Midfielder Eugeneson Lyngdoh seems to be getting better with every passing game while Udanta Singh has forged a good understanding with Harmanjot Khabra down the right.

The game kicks off at 4 pm and will be beamed live on the Ten 2 network. 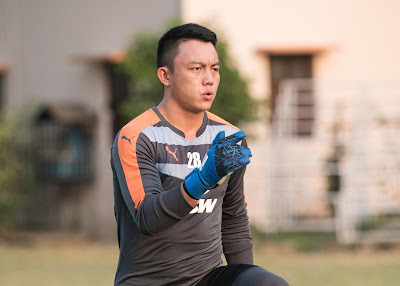 Posted by diegostrikes at 5:43 PM