Bengaluru FC will be hoping to finish off the job at hand when they take on Korea DPR side 4.25 SC in the second leg of the 2017 AFC Cup Inter-Zonal semifinal at the May Day Stadium in Pyongyang, on Wednesday. Taking a three-goal lead into the game, thanks to a dominant win at the Kanteerava a little over two weeks ago, the Blues will be eager to book their place in the Inter-Zonal final.

However, the game won’t be an easy one with 4.25 SC banking on home advantage and support to spur them on to a fightback. Speaking on the eve of the crucial game, Head Coach Albert Roca adopted a cautious approach. The Spaniard expects his team to stay focused and avoid any slip ups.

“It’s going to be a tough match for us, given the conditions. Even though we have a three-goal advantage, we can’t be complacent. We have to stay focused on our game plan and get the job done on Wednesday,” he said.

While the team’s initial plan was to travel to Pyongyang on Friday, DPR Korea’s Foundation Day Celebrations on Saturday, September 9th meant the Blues had to postpone their departure to Sunday night and landed in the capital city late on Monday after transiting through China. Speaking on the lack of time to acclimatize to the conditions, Roca said, “It would have been ideal to arrive a little earlier which would have given our boys enough time to get used to the conditions. But it is what it is. We want to hit the ground running and I hope it turns out to be a good experience.”

On the team news front, Roca has almost an entire squad to choose from with no suspensions or injuries to worry about. However, Dimas Delgado, Lenny Rodrigues and Harmanjot Khabra who all picked up bookings during the first leg will have to be careful as another booking will find them suspended from the Inter-zonal final should the Blues make it through.

The game kicks off at 5 PM local time (2 PM IST) in Pyongyang on Wednesday. 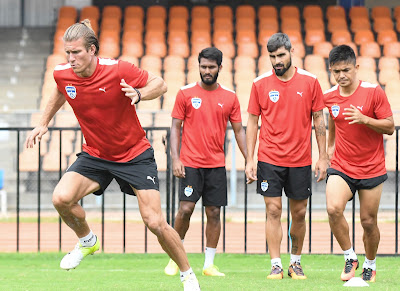 Posted by diegostrikes at 6:56 PM