Bengaluru held to a goalless draw by Transport United

Bengaluru will have their task cut out at the Fortress a week from now, needing a clear win to progress to the second round of qualifiers in the 2018 AFC Cup after a goalless draw against Transport United in the first leg of the Preliminary stage clash at the Changlimithang Stadium in Thimphu, Bhutan, on Tuesday.

With the Blues failing to break down the Bhutan side’s resolute defending the tie is still open as the winner on January 30th will seal a place in the playoff stages.

Having traveled with a relatively young squad, Coach Albert Roca started with skipper Lalthuammawia Ralte in goal as midfielders Malsawmzuala and Alwyn George along with defender Zohmingliana Ralte and striker Daniel Lalhlimpuia were handed their first starts of the season. Bengaluru boy Prashanth Kalinga started in a four-man defense, making his much-anticipated first team debut after coming through the youth ranks at the club.

The game began slowly with both sides opting to play cautiously. The Blues weren’t affected by the conditions, as temperatures dropped to as low as six degrees Celsius, as they continued to play their normal passing game. It took half an hour for the first real chance of the game, as Boithang Haokip’s perfect corner-kick from the right found Toni Dovale clear at the edge of the box. The Spaniard however, failed to make the desired connection.

The second half burst to life almost immediately as Daniel found himself gifted with back-to-back chances inside five minutes. The striker blazed wide on both occasions, failing to convert after some good work by Toni, who set him up inside the box.

The chances were few and far between but Bengaluru kept control for majority of the proceedings as the lack of finishing did no favours for Roca’s men. Two more chances at the end of the game, one through Lenny Rodrigues’ long ranger four minutes past the hour mark and from a Daniel shot moments later, forced the rival custodian into saves that he pulled off without fuss.

Roca made three changes in the final quarter hoping to break down the home side’s defense and handed debuts to Thongkhosiem Haokip, Joyner Lourenco and Cletus Paul. United however, managed to defend deep and keep the scoreline unchanged as the tie remained open heading into the second leg.

The Blues now return to Indian Super League duties where they host NorthEast United on Friday before facing Transport United at the Fortress on 30th January in the second leg. 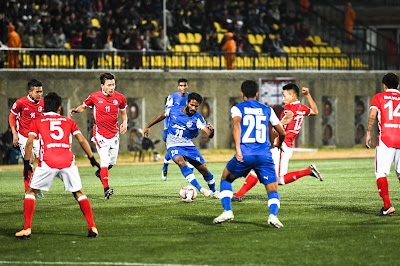 Posted by diegostrikes at 11:41 PM