Ten-man Bengaluru FC ‘B’ suffered their second defeat of the campaign going down 0-1 to Ozone FC in their seventh game of the BDFA Super Division League at the Bangalore Football Stadium, on Thursday.

In the first half that lacked real chances, a freak goal from Anup Theresraj handed Ozone all three points. The attacker chased down a long ball from Anto Xavier on the right flank, and managed to somehow connect with it on the slide just ahead of BFC ‘B’ custodian Shainkhan C. who had rushed out to punch it away. The effort was on target and the ball rolled in into an empty net to put Ozone up 1-0 in the 42nd minute. Meanwhile, the Blues had shout for a penalty turned away early in the half after Leon Augustine was brought down inside the box.

The second half saw Coach Naushad Moosa make a double change brining in Robinson Singh and Bidyananda Singh to add more creativity in attack. While the Blues began pushing up, left-back Parag Shrivas was shown a straight red for a high-foot challenge on an opponent reducing BFC ‘B’ to ten-men in the 57th minute.

The Blues continued to push forward in search of the equalizer, but Ozone capitalized on their one-man advantage to hold on to their narrow lead and seal a win. The result meant that BFC ‘B’ stay second in the standings with 13 points from seven games as Ozone clinched the title with 30 points. 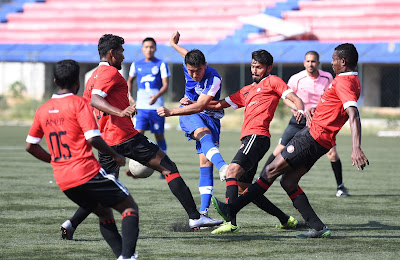 Posted by diegostrikes at 9:30 PM