Karnataka beat Odisha 2-1 to knock them out of the ongoing 72nd Santosh Trophy 2017-18 in a Group B fixture at the Rabindra Sarabar Stadium on Saturday (March 24, 2018). Leon Augustine and Rajesh S scored in the 27th and 88th minute respectively to help their side register a second consecutive win in the tournament. Skipper Arjun Nayak scored the only goal for Odisha in the 30th minute.

It was a must-win game for the Eastern state in order to remain in the hunt for a semi-final spot after their 5-0 drubbing against Mizoram. They also began the match on a positive note as their first shot on target by Bikash Padhihary was kept out by Karnataka custodian Shainkhan CP in the 9th minute.

Thereafter, Karnataka created quite a few chances in front of the Odisha goal but failed to find the back of the net. The deadlock was finally broken in the 27th minute when winger Leon Augustine ran almost 30 yards down the middle and slotted the ball home. He went past four defenders to score a brilliant solo goal.

Odisha could have equalised at the half-hour mark when Sunil Sardar was one on one with the Karnataka custodian but he failed to convert a simple header.

Just when it seemed Karnataka would take the lead into half-time, Narendra Sahoo’s men came back into the match thanks to a goal from skipper Arjun Nayak. Kartika Bhola floated a corner inside the box which was headed in by Nayak.

After an entertaining first half, both the sides took a pragmatic approach and concentrated on solidifying their defensive organisation. Karnataka came close to score on a couple of occasions but failed to create an impact in the attacking third.

Odisha’s Arbin Lakra on the other hand missed a golden one on one opportunity to put his team in front in the 81st minute.

Rajesh S then scored the winning goal for the Southern state in the 88th minute. Gunashekar Vignesh entered the Odisha box from the left side and squared the ball for Rajesh. The striker pushed the ball into an empty net to seal crucial three points for his side.

Odisha are out of the semi-final race after falling to their third successive defeat. Karnataka, on the other hand, are second in the group and are very much in contention for a last-four spot. 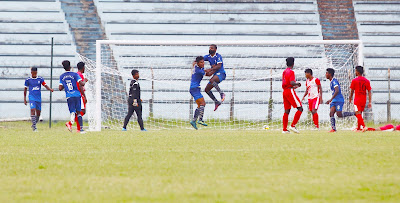