Down by a goal Karnataka displayed solidarity among themselves to demolish Goa 4-1 in a one-sided Group B encounter of the 72nd Santosh Trophy at the Sailen Manna Sports Complex in Howrah on Thursday.

At half time Goa were leading 1-0. Kapil Hoble scored in the 26th minute for Goa while Gunashekhar Vignesh equalised for the Southern state in the 54th minute before S. Rajesh's 61st minute goal along with a 69th minute own goal by Mathew Gonsalves and 89th minute strike by Leon Augustine sealed the full three points for Karnataka.

Goa coach Armando Colaco made four changes to the side that went down 1-3 to Mizoram on Tuesday, by handing starts to goalkeeper Agnelo Gomes and midfielders Joachim Abranches, Subert Pereirra and Clive Miranda, while his Karnataka counterpart P.  Muralidharan opted for the 4-4-2 formation for their tournament opener with Rajesh and Liton Shil leading the line.

Karnataka began the game in attacking mode and created the first chance in the 6th minute. Rajesh did well to cut in past a couple of defenders from the left but his powerful drive sailed inches over the horizontal.

Around the 15th minute mark, Karnataka had another chance through striker Liton but a slight delay allowed enough time to Goa defender Jessel Carneiro to clear the ball.

While Karnataka pressed high up, Goa managed to take the lead against the run of the play. Kapil capitalised on a defensive error to beat Karnataka custodian Shaikhan from Joachim Abranches' low cross in the 26th minute.

The goal appeared to be the wakeup call for Karnataka, as they began attacking with intensity through Vignesh and Rajesh but some desperate defending by Goa saw the first half ended 1-0.

The second half started with Karnataka having greater possession and looked more threatening going forward, thanks to crisp passing, good off-the-ball movement and dazzling individual skills. Karanataka found the equalizer through skipper Vignesh, who slotted from Sukesh Leon's pass in the 54th minute.

The goal inspired Karnataka to get even more offensive in their approach and they took the lead in the 61st minute when Rajesh found the back of the net from Liton's pass, which was complimented by some lazy defending by Goa.

Goa though created some chances but failed to equalize, as they failed to stick to their passing game policy. The players seemed to be more keen on playing direct football sending long balls from the centre-line.

Karnataka's third goal came in form of own goal in the 69th minute when experienced Mathew Gonsalves slotted in his own net while trying to clear Sukesh's cross.

Thereafter, Goa went all out to grab some late goals but all their efforts were undone by an 89th minute strike from young Leon Augustine. The Bengaluru FC reserves winger got the ball from midfield and ran past a couple of defenders to slot a brilliant volley home.

Karnataka will face Odisha next on March 24 at Rabindra Sarobar Stadium while Goa will face the same opponents on March 26 at Mohun Began Ground. 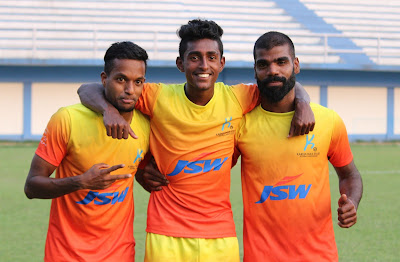 Posted by diegostrikes at 10:53 PM