It took a bit of everything – a boss-like show in Dhaka, drama in Guwahati, a big push from a resolute Aizawl FC side as Bengaluru FC finished as champions of the South Zone, and finally booked a place in the knock-out stages of the AFC Cup for a fourth straight season.

Goals from Daniel Segovia (13’), Nishu Kumar (16’, 58’) and Sunil Chhetri (60’) gave the Blues a 4-0 win over Abahani Limited Dhaka. But it was the game in Guwahati that would decide Bengaluru’s fate where Aizawl who needed to beat New Radiant or hold the Maldivian side to a draw for Bengaluru to go through. And the Santosh Kashyap-coached side chose the three-point route to aid the Blues, beating New Radiant 2-1.

The water-logged pitch from overnight showers looked like giving Bengaluru FC trouble, but two quick goals in a span of three minutes dispelled any such worries for Albert Roca. Playing a slightly heavy version of their free-flowing brand of football, the Blues shot into the lead when Chhetri rolled the ball perfectly across the face of the goal, leaving Segovia with the simple job of scoring past Abahani ’keeper Sahidul Alam to make it 1-0.

Chhetri then squirmed past two blue Abahani shirts to tee up Nishu who slammed the ball low to the corner and beyond Alam. The two early blows were enough to prompt Abahani into submission as Bengaluru hogged possession and began camping in the hosts’ final third.

Chhetri then completed a hat-trick of assists when he chipped over the Abahani defence for Nishu to fantastically control the ball on his chest before firing home from close to make it 3-0. The skipper finally got into the act on the hour mark when Alam spilled a cross that fell to Chhetri who scored his 24th goal of the season with a simple finish after holding off a defender.

Elsewhere in Aizawl where everyone who had anything to do with Bengaluru FC had their eyes on, Leonce Dodoz gave the hosts a 61st minute lead that Romanian Andrei Ionescu doubled in the 82nd minute. New Radiant needed three goals to keep their hopes of making the knock-out stages alive and Ibrahim Hassan began the fight with an 85th minute strike. But Aizawl, with nothing to play for in Group E, clung on to the lead that sent the squad in Dhaka in raptures.

A draw process that involves four zones – Central Asia, South Asia, East Asia and ASEAN - will determine Bengaluru’s next opponents. While three group winners have been decided, the final of the ASEAN Zone is yet to take place. 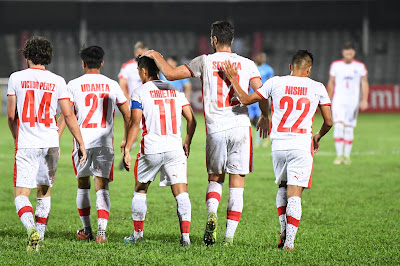 Posted by diegostrikes at 11:05 PM