Bengaluru FC bounced back to winning ways in the BDFA Super Division League with a 9-0 thrashing of Students Union in a Round-3 encounter at the Bangalore Football Stadium, on Friday. Leon Augustine’s hat-trick (18’, 46’, 87’) and Naorem Roshan Singh’s brace (10’, 20’) powered the big win as Asheer Akhtar (22’), Calvin Baretto (71’), Myron Mendes (72’) and Edmund Lalrindika (80’) too got on to the scoresheet.

Going into the game, Coach Naushad Moosa made three changes to the line-up, handing starts to defender Biswa Darjee, midfielder Ajay Chhetri and BFC U15s 'keeper Herojit Singh who made his debut.

After some early chances which were thwarted by Students Union goalkeeper Calvin Abhishek, the Blue Colts broke the deadlock in the 10th minute after attacker Roshan Singh controlled and smashed home Biswa Darjee's outside-of-the-boot cross in from the left.

Moosa's boys kept the tempo high and netted three more times in a span of five minutes. Leon doubled the lead when he headed in Ajay Chhetri's deft chip in from the left in the 18th minute before Roshan completed his brace two minutes later. SUFC failed to clear Ajay's cross in from the left and Roshan reacted quickest to finish to make it 3-0.

The score was 4-0 just two minutes later when defender Asheer Akhtar fired home a low drive from the edge of the box on the right as the Blue Colts ran riot.

The second half began explosively as Bengaluru struck inside 30 seconds. Striker Parag Shrivas capitalised on a weak back pass to gain possession and slid it across the goal from the right to find Leon at the far post for his second of the game.

The Blue Colts continued to push ahead then struck twice in two minutes. Substitute Calvin Baretto scored the sixth of the game, tapping home Biswa’s pass from the right after Altamash did well to find the wing-back clear in the box. A minute later, Edmund Lalrindika, on for Ajay Chhetri, set up Myron Mendes with his first pass of the game, as the skipper slid it past Abhishek to make it 7-0.

Bengaluru then struck twice more in the final ten minutes. Edmund controlled Biswa's cross in from the right and scored on his second attempt after the first one was blocked, and then claimed his second assist when he set up Leon to complete the latter’s hat-trick with three minutes left to play.

The Blue Colts next take on Kickstart FC on 24th November. 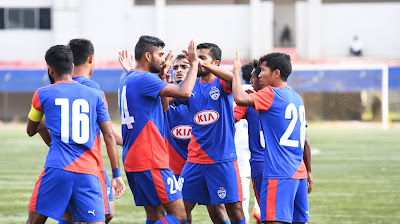 Posted by diegostrikes at 9:19 PM