A second half double from former India international and National League winner R.C. Prakash handed Indian Telephone Industries FC (ITI) a thrilling 2-0 victory over Hindustan Aeronautics Limited SC (HAL) in an exhibition game organized by Bengaluru FC at the Bangalore Football Stadium, on Saturday.
After a goalless first half, Prakash (31’, 40’) finished off two brilliant counter attacking moves with Bengaluru FC player Harmanjot Khabra assisting on both occasions. Khabra in fact, was joined by first team players Erik Paartalu and Gursimrat Singh Gill in the ITI squad, while Chencho Gyeltshen, Juanan Gonzalez and Rahul Bheke turned out in HAL colours for a cameo in the second half.
Meanwhile, ITI custodian Balaji Narsimhan pulled off some brilliant saves to deny striker Xavier Vijayakumar who was a livewire for HAL throughout the game and keep their lead intact.
With the West Block of the stadium flocked by a number of vocal fans across all age groups, the legends were cheered on throughout the sixty-minute game as they went all out re-igniting their old rivalry. 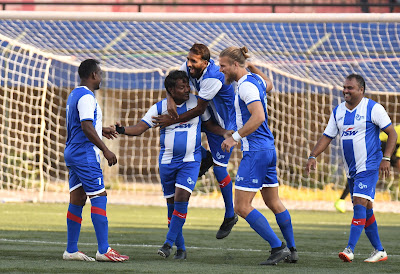 Posted by diegostrikes at 11:11 PM