Bengaluru FC began their Hero Sub-Junior League campaign in style with a massive 11-0 win over Jain Academy for Sports Excellence at the Bengaluru Football Stadium, on Sunday.

In a completely one-sided affair, the Young Blues dominated right from the start and struck seven times inside the first half. The best of the efforts came from skipper Gautam, who let one fly from 20 yards into the bottom corner. Rajan Mani's boys continued to impress in the second period with four more goals to take the tally into double digits.

Bengaluru FC will next play BOCA Juniors SC away at the Centre for Sports Excellence in Yelahanka on Thursday, February 28. 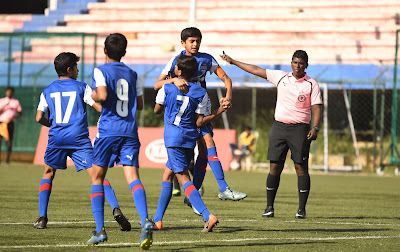 Posted by diegostrikes at 4:40 PM