A cagey game saw both sides put on a disciplined performance, which South United FC (SUFC) did just enough to walk away with a narrow win in the end. While most of Fateh Hyderabad's attacking threat early in came through long throws, SUFC were reliant on some great wing play. However, both teams put on a stellar defensive show for most of the game and only saw themselves lose shape towards the end.

SUFC channeled most of their attacks on the left flank through Aaron and Sudipta. They were involved in the best chance of the first half as they created a great opportunity for Rungsing, whose composure let him down in front of goal.

The stand out performance of the half came from defender Amit Tudu who was at the end of every cross and made a number of important blocks to keep his side in the game.

The second half started in the same vein as the first, with time however, both sides began to venture forward much more.

This saw FHAFC press high up the pitch and win the ball in dangerous areas. On one such occasion they came within a hair's breadth of getting the lead but Jayanth's superb reactions kept them in the game.

Only a few minutes later, Aaron was released down the right, he did well to beat his man and roll the ball into Jotin Singh's path and he made no mistake from a few yards out.

The visiting side pushed hard in the remaining 20 minutes to pull level, but despite coming close on a couple of occasions, SUFC held out to clinch the win. 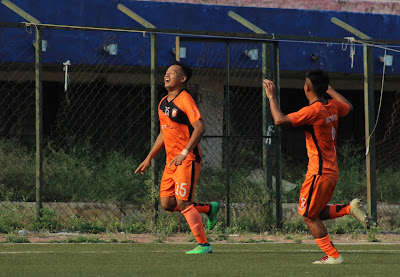 Posted by diegostrikes at 7:25 PM