Bengaluru FC have signed left-back Ajith Kumar on an undisclosed fee from Chennai City FC, the club announced on Saturday. The 23-year-old joins on a three-year deal, as Carles Cuadrat’s side add depth to their squad ahead of the 2020-21 Indian Super League campaign.

Having been selected through trials into the Chennai City FC system in early 2018, Ajith played a crucial role in the South Indian side’s I-League triumph the following year, appearing in every one of his side’s 20 games in the 2018-19 campaign.

“I am thrilled to have become a Bengaluru FC player. This is a club I admire a lot and while I did have a few options to choose from, Bengaluru was top of that list at every stage of my decision making. The chance to share a dressing with a legend like Sunil Chhetri who I hope to learn so much from, and so many of the national team boys is very exciting for me,” said Ajith.

Ajith also said that while there would be pressure on him to perform, he hopes to adapt quickly. “I’ve watched a lot of Bengaluru FC games and have a fair idea of how the coach likes to play. I am happy to be part of any plan that he has for me. One thing is for sure, I will be giving one hundred percent every time I am on the pitch.”

The Chennai-born full-back faced off against the Blues in a Super Cup quarterfinal earlier in 2019, putting on a solid show down the left flank as Chennai City FC secured a 2-1 win.

“We have been pursuing Ajith for some time now, tracking his progress in the I-League and his performances with Chennai in the AFC Cup. He is a bright young footballer, and we believe that with the right guidance he has all the qualities to fit into our system,” said club CEO Mandar Tamhane.

Bengaluru FC are scheduled to begin their Indian Super League campaign in November, with the season set to be played behind closed doors in Goa. The JN Stadium, in Fatorda has been designated as the Blues’ ‘home’ venue for the duration of the tournament. 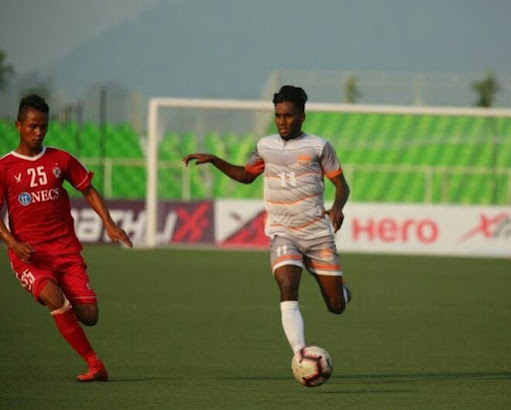 Posted by diegostrikes at 12:13 PM