FC Bengaluru United (FCBU) registered an emphatic 8-1 win to kick off their campaign in style. They were on the attack from the very first minute of the game, asserting their supremacy right away. Asrar got FCBU on the scoreboard in the 15th minute with a penalty and floodgates opened after that. Opportunities were created at will and capitalized on with a mix of smart play and aggressive tactics. Income Tax scored in the 40th minute courtesy a defense lapse; only time FCBU faltered.

FCBU were leading 3-1 at the half time, they further stamped their authority in the second half, scoring at regular intervals. A measure of their commanding performance was that even when the substitutes came on towards the end of the game, the scoring did not falter. Chaithan and Naro both scored in the final minutes of the game. 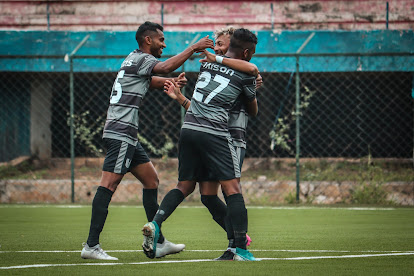 Posted by diegostrikes at 10:54 PM