Bengaluru FC began their BDFA Super Division League campaign with a convincing 3-0 win against Young Challengers FC, at the Bengaluru Football Stadium, on Friday. Lalhmunmawia’s goal in the first half was added to by strikes from Shivasakthi and Ratanbi Singh as the Blue Colts capped off a dominant performance.

Bengaluru were on the front foot from the start, with Sandesh Bhoite’s side camping in the opposition half, dictating proceedings for the most part. The first shot at goal came in the eighth minute when, with possession just outside the box, Bekey Oram saw an opening. The youngster’s opportunistic strike sailed just over the bar.

Bekey’s presence in the midfield was key to Bengaluru having a majority of the possession, and he was central to the move that put the side ahead. The midfielder won the ball in midfield, found Akashdeep Singh’s run with a perfectly weighted ball and Lalhmunmawia made no mistake in finishing the winger’s cross on the half volley.

Past the half hour mark, Shivasakthi got the ball at the edge of the box, turned his marker and evaded a few challenges but his shot lacked power and it was an easy save for the ’keeper. The final chance of the first half came in the 41st minute when Bekey’s danced past a few challenges and, with the ’keeper coming off his line, attempted a lob but was denied by a goal line clearance.

Five minutes into the second half, Bengaluru had a penalty and a chance to double their lead. Shigil NS, on as a half time substitute, won the spot-kick after he was brought down by Challengers’ goalkeeper Dilip V. However, Lalhmunmawia’s effort from the spot was saved by Dilip, who then did well to block the rebound.

Despite the miss, Bengaluru stayed on top of their game, and their persistence was rewarded in the 62nd minute when Shigil played Shivasakthi through. The Bengaluru forward found himself one-on-one with the ’keeper and beat him at the near post to double his side’s lead.

Shivasakthi then turned provider for Bengaluru’s third goal, as he found Ratanbi Singh on the overlap. The latter, who came on as a substitute, cut past his marker and unleashed a shot that bounced off the underside of the bar and into the goal. Dipesh Chauhan, a spectator for most of the match, showed good reflexes in the dying moments of the game to preserve his clean sheet.

The Blue Colts are back in action on January 20 when they take on FC Deccan at the same venue. 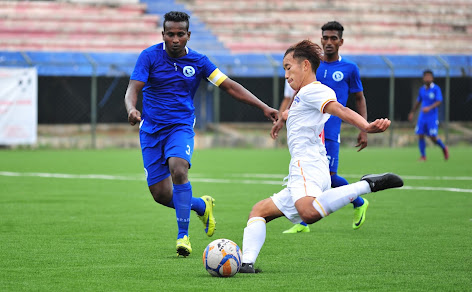 Posted by diegostrikes at 7:32 PM