Bengaluru FC continued their winning start to the BDFA Super Division campaign with a convincing 8-1 defeat of Income Tax FC, at the Bengaluru Football Stadium, on Wednesday. Eighteen year old Shivasakthi was the star of the day, with his five goals helping Sandesh Bhoite’s side climb to the summit of the table on goals scored.

Bengaluru’s early pressure paid off with the side taking the lead in the 3rd minute when Lastborn Mawphiang ran down the right flank and his low cross into the box was finished by Shivasakthi. The second goal, 12 minutes later, was almost a carbon copy of the first. The striker managed to get to the end of a low pass into the box, with Monirul Molla getting the assist this time. Shiva then turned provider, as his pass found Ratanbi Singh who took the ball past Goushik in goal and finished into an empty net.

Shivasakthi got his hat-trick just before the half hour mark, when he intercepted a pass on the halfway line, carried it into the box and finished low past Goushik. Only three minutes later, he got his boot to Lalthangliana’s cross and beat the ’keeper to put the Blue Colts 5-0 up. Income Tax scored with their first shot on goal, when Vasanth managed to capitalise on a defensive lapse before beating Dipesh Chauhan at the far post.

The Blue Colts dominated proceedings on the other side of the break, and it took only five minutes for them to add to the scoreline again. Shiva latched on to N.S. Shigil’s through ball, managed to feint his way past the ‘keeper before sending his marker the wrong way and finishing into an open goal.

Things went from bad to worse for Income Tax, when their custodian Goushik was shown a second yellow card after he was adjudged to have handled the ball outside the box. Bekey Oram, on as a substitute, scored from a free kick only moments later to put the Blue Colts 7-1 up. From the edge of the box, Oram managed to find a gap in the Income Tax wall and Andreco could only watch as the ball sailed past him.

Bengaluru’s final goal on the day came from a mix up in the Income Tax defence. Akashdeep failed to get enough on his shot, but a failure to clear their lines saw the ball deflect off Shashidharan and into the far post past a hapless Andreco.

The Blue Colts are back in action on February 2 when they take on Students Union FC. 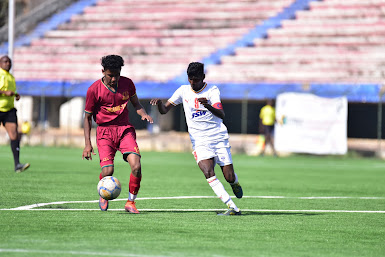 Posted by diegostrikes at 8:35 PM