Bengaluru FC Media
Bengaluru FC added to their perfect start in the BDFA Super Division League with a 3-0 defeat of ADE FC at the Bengaluru Football Stadium, on Thursday. The win, their fifth in as many games, sees the side go top of the League standings on goal difference.
Sandesh Bhoite’s side dominated proceedings in the first period, having the majority of the possession and creating multiple chances. Thoi Singh, NS Shigil, Damaitphang Lyngdoh and Lalthangliana had several chances to break the deadlock but the scores were unchanged as the sides went down the tunnel at the break.
Bhoite made as many as four changes at half time, with Muhammed Inayath, Jagdeep Singh, Kamalesh and Omega Vanlalruaituanga taking their place on the pitch. Only seven minutes into the second half, Bengaluru had the lead. Kamalesh, having won the ball in midfield, played Thoi Singh through. The midfielder’s shot ricocheted off ADE bodies and fell to Damaitphang Lyngdoh, whose first-time volley nestled the back of the net before ADE ’keeper M. Gunashekhar could react.
Damaitphang’s movement in the middle of the park helped him evade his markers and he made it count in the 55th minute. With time and space on the left wing, he picked Thoi Singh’s run into the box from the opposite flank. The winger got to the cross but was clattered over as he tried to cut inside, and the referee pointed to the spot. Thoi’s penalty was saved by Gunashekar but the rebound fell kindly to the Blue Colts’ number 10, and he finished without fuss to double the Blue Colts’ lead.
Only eight minutes later, Thoi was in the thick of the action once again when he was taken down in the box, prompting the referee to award another spot-kick. Jagdeep stepped up this time, sending Gunashekhar the wrong way to put the Blue Colts 3-0 up. With a comfortable lead, the Blue Colts saw out the rest of the fixture and climbed their way back to the top of the charts.
Bengaluru FC are back in action on February 9 when they take on Bangalore Dream United FC. 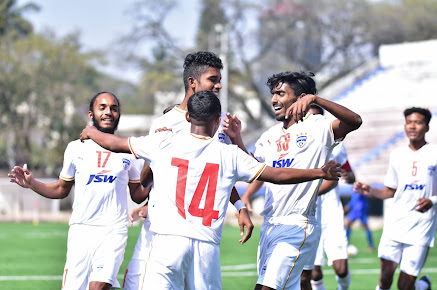