Bengaluru FC returned to winning ways with a 3-0 defeat of Bangalore Independents FC, at the Bengaluru Football Stadium, on Monday. Striker Shivasakthi’s first-half hat-trick proved the difference as Sandesh Bhoite’s side regained their spot at the summit in the BDFA Super Division standings.

The Blues Colts dominated proceedings from the start and took the lead with just six minutes on the clock when Thoi Singh found himself in space and unmarked in the middle of the pitch. The midfielder picked out Shivasakthi with a through ball and the Blue Colts’ no. 9 finished past the onrushing Nishanth N. to put BFC 1-0 up. Only two minutes later, he doubled the lead when he won the ball off Navneeth Krishna at the edge of the box and finished with a first-time effort that found the bottom corner.

Shivasakthi completed his hat-trick right on the half hour mark when he dropped deep to evade his markers and picked Thoi’s run on the left wing with a through ball. The winger cut into the box past Independents defender Surendra and pulled it back to Shivasakthi, who smashed it into the roof of the net from close range to make it 3-0.

Four minutes into the second half, the Blue Colts almost added a fourth to the scoreboard when Monirul Molla, on as a half time substitute, found his way into the box and picked out Shivasakthi but the striker’s shot was straight at the ‘keeper. The Blue Colts controlled proceedings for the rest of the half, rang in several changes and saw out the game with ease, to take all three points and go top of the standings.

Bengaluru FC are back in action on February 26 when they take on ASC. 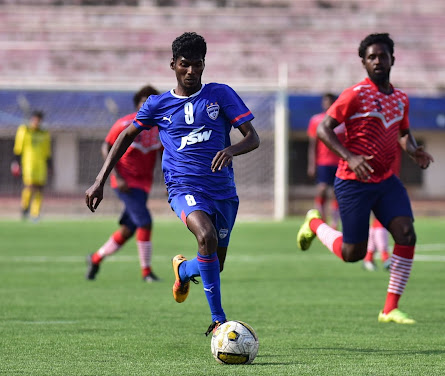 Posted by diegostrikes at 9:04 PM