A goal from Asrar Rehber in the dying minutes of the game helped FC Bengaluru United steal a thrilling 2-1 victory over ASC in their eighth game in the ongoing BDFA Super Division campaign. With this win, they keep their unbeaten streak intact.

FC Bengaluru United began with strong attacking play – in just three minutes, a long shot from Stendly went over the bar. They continued attacking but the finishing play kept eluding them and it was ASC who went up in the 11th minute. They made the most of a freekick from the edge of the box and it was one of the rare times in the tournament thus far that FC Bengaluru United had allowed the opposing team to get ahead.

FCBU continued to create chances right through the first half, but were unable to see them through, and went into half-time a goal down. However, they kept up the attacking play in the second half and it finally yielded a positive result – an assist through Ronaldo allowed Chaitan to neatly tap in the ball for an equalizer in the 70th minute. With the score equal, both teams had their foot on the pedal, creating chances, but conversion eluded them.

FC Bengaluru United rung in aggressive substitutions and hit pay dirt – Asrar came on in the dying minutes and made the most of a defensive error to slot the ball cleanly over the goalkeeper to help sneak in a hard-fought 2-1 victory for his team in the final minute of the match.

With this win, FC Bengaluru United are back at the top of the points table, with four games to go. 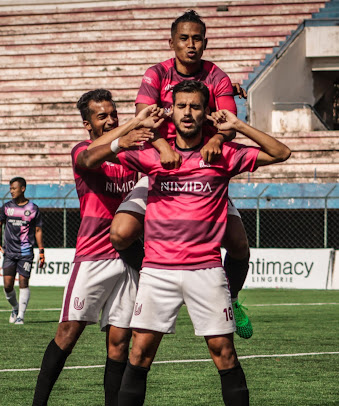 Posted by diegostrikes at 9:55 PM