Bengaluru FC Media
Bengaluru FC kept their charge towards a third successive BDFA Super Division title going with a 3-0 defeat of ASC & Centre FC, at the Bengaluru Football Stadium, on Friday. Goals from Thoi Singh and Shivasakthi (2) gave Sandesh Bhoite’s team all three points, allowing them to remain in contention to defend their title.
The Blue Colts were on top of the game from the beginning and the side’s top scorer Shivasakthi was in the thick of things when he found Akashdeep Singh with a ball over the ASC defence but the winger saw his shot blocked away. Despite creating a host of chances in the first period, both defences stood firm to end an entertaining first half goalless.
Ten minutes after the restart, the Blue Colts broke the deadlock through Thoi Singh. The no. 10 made his way to Shivasakthi’s through ball from the left flank, took a touch before finishing past ASC custodian Premchand Singh.
Only four minutes later, the Blue Colts doubled their lead when Akashdeep’s low cross from the right was tapped in by Shivasakthi from close range. Akashdeep almost turned provider again, when his pass for Kamalesh found the midfielder in space but the shot fizzed just wide of the post.
Eight minutes from time, Shivasakthi got his second of the day when he capitalized on a defensive error from ASC skipper Robinson Singh, lifted it over the last man and finished low into the corner to seal the points for the Blue Colts.
Bengaluru FC are back in action on March 4 when they take on MEG. 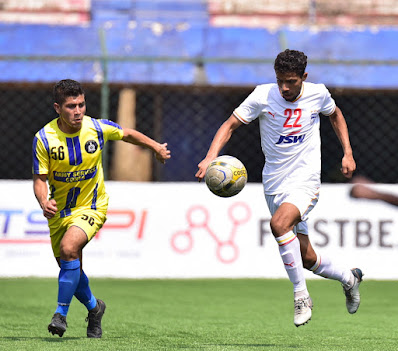 Posted by diegostrikes at 9:41 PM