FC Bengaluru United Media
FC Bengaluru United (FCBU) contained any sort of challenge from Young Challengers as they routed them 6-0 in their ninth game of the BDFA Super Division campaign. FCBU attacked with finesse in a performance that serves fair warning to their upcoming opposition.
They have been quick off the blocks in all their previous games and it was no different this time around with chances being created from the third minute of the game. Ronaldo capitalised on a deflected cross from Anup to set up a shot for Naro, who firmly headed it into the bottom-right corner of the goal.
Naro and Ronaldo were in the thick of things, creating chances, and attacking the goal. The duo combined to push FC Bengaluru United 2-0 in the 25th minute.
FCBU created chances at will and their defence led by Robert Primus never allowed the Young Challengers a look-in. They continued to dominate the same way in the second half. They were up 4-0 by the 60th minute, courtesy goals from Kiran and Anup while substitutes Ronald and Monotosh combined to push them 5-0 up soon after.
Young Challengers, though upped the ante on the attack, but the FCBU defence held firm, and finally, Naro struck in the 89th minute to seal a commanding 6-0 win. 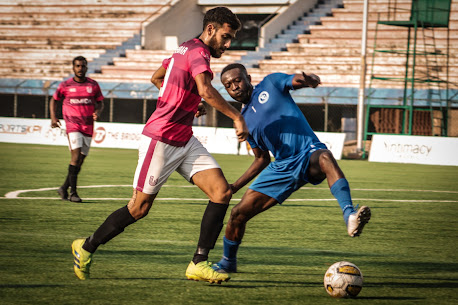 Posted by diegostrikes at 10:49 PM