The ongoing BDFA Super Division league got more exciting after table topper FC Bengaluru United (FCBU) went down to Kickstart FC 1-2 this evening. This was FCBU’s first defeat in tenth game, they still lead the points table having played a game more than the second placed Bengaluru FC. Kickstart return to winning ways after their loss to MEG in the previous game, they too join the title fray.

FC Bengaluru United came out all guns blazing and were up 1-0 in the very first minute of the game. Arun’s dribble and following cross inside the box deflected off by Kickstart FC’s Satishkumr to give FCBU into an early lead.

FC Bengaluru United continued to attack, made two early substitutions, but it was Kickstart FC again who nudged ahead in the 40th minute by a defensive lapse, which Kickstart capitalized upon to grab the lead.

FC Bengaluru United came out strong in the second half, determined to push ahead, but it was not to be. While they created several opportunities, taking advantage of a fluid Kickstart FC defense, they were unable to put in the finishing touch. Malem, Vignesh, Arun, Chaitan, Ronaldo all worked hard to create opportunities but were unable to see them through. They pressed hard, even in extra time but conversion eluded them.

All eyes will now be on the FC Bengaluru United vs Bengaluru FC game on Monday, 8th March, whose result will play a key role in determining who will emerge at the top of the league. 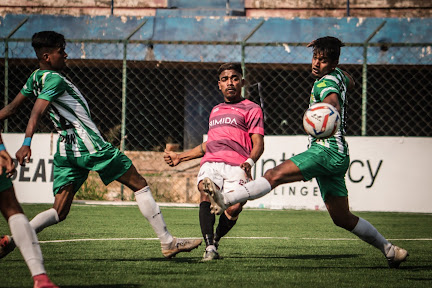 Posted by diegostrikes at 10:04 PM