FC Bengaluru United (FCBU) kept their title hope alive by winning a must-win game against the favorites Bengaluru FC. In the dying minutes it was Ronaldo, who calmly tapped the ball to the back of the net and snatched a thrilling 3-2 win

Few dubious decisions that went against Bengaluru FC marred the proceedings after the game and Bengaluru’s Harpreet was shown a red card.

FCBU broke the deadlock in the 34th minute courtesy Asraf’s smart corner. Trinidad and Tobago international Robert Primus jumped highest from a corner and headed home at the far post to put his side 1-0 up.

The Blue Colts were back on level terms just 13 minutes into the second half. Shivasakthi found space between the FCBU’s central defenders, got to Kalamesh’s through ball and placed his shot to the ‘keeper’s left to make it 1-1.

It took less than five minutes for FCBU to retake the lead. From a corner, English forward Daniel Carr managed to put the ball into the far corner to put them 2-1 up.

The Blue Colts were denied a chance to restore parity when the referee refused to acknowledge Robin Gurung‘s handball in the box. However, BFC dug deep, kept attacking the FCBU goal and were rewarded deep into stoppage time. Unmarked at the edge of a box from a corner, Damaitphang got his header into the top corner with the ‘keeper well beaten.

Despite getting the equaliser late in the game, FCBU converted the final chance of the game to lead 3-2 with virtually the last kick of the day and leapfrog the Blue Colts to the top of the table, taking the title race to the final round of the league. 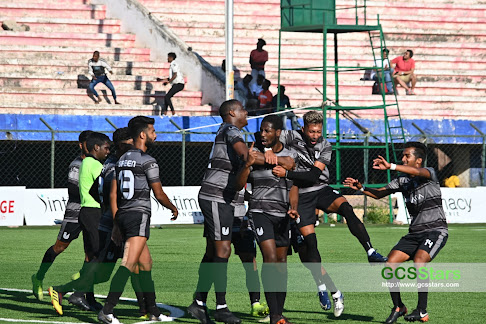 Posted by diegostrikes at 11:57 PM