Bengaluru FC Media
Blues’ Head Coach Marco Pezzaiuoli said his side would have to be at their best, with their Group D campaign in the 2021 AFC Cup set to begin with a clash against ATK Mohun Bagan, at the National Stadium, in Maldives, on Wednesday. Bengaluru, who defeated Club Eagles 1-0 in the playoff on Sunday, are grouped alongside ATK Mohun Bagan, Bashundhara Kings and Maziya S&RC, with only one team set to qualify for the Inter-zone playoff semifinals.
“Our last game was only two days ago, so it was a short recovery for the team. It's not really an advantage, but I can see the glass either as half empty or half full, and I choose to see it half full. There was a good spirit and positive energy in the team after the win. We are happy to be in the Group Stage of this competition. This is a new game, a new start and we have a renewed focus. We need to be very sharp against ATK Mohun Bagan, because I am expecting an aggressive game,” said Pezzaiuoli, speaking at the pre-match press conference.
ATK Mohun Bagan, who qualified for the group stages of the competition by virtue of Mohun Bagan’s victorious 2019-20 I-League campaign, have recruited strongly since their defeat to Mumbai City FC in the 2020-21 Indian Super League final, and Pezzaiuoli believes the Blues will have their task cut out on Wednesday. The Kolkata-based side have added several players to their squad over the summer, including the likes of French midfielder Hugo Boumous, Amrinder Singh, Liston Colaco, Ashutosh Mehta, Bidyananda Singh and Deepak Tangri.
“ATK Mohun Bagan like to play a lot of long passes, go for the second ball and press high up on the pitch, which calls for a different approach from us. But they have also changed things in the summer, by bringing in a French foreigner (Hugo Boumous), among other players. This shows that they want to win the Indian Super League and the AFC Cup. We have to be in good spirit, show good focus and I am certain that we have a chance of winning tomorrow,” Pezzaiuoli added.
Jayesh Rane scored the only goal of the game when the Blues beat Club Eagles, and with only three games to play in the Group Stages, goalkeeper Gurpreet Singh Sandhu said the task at hand was one that required focus and commitment from all corners.
“It’s true that things are different this time, because there are fewer games to play in the Group. But it is still difficult, and we have to be focused. It was important for us to get into the Group Stage because we want to do well in Asia, as a club. Now it’s up to us to make sure we put on a good performance and try to do our best in each game,” said Gurpreet.
Kick-off between ATK Mohun Bagan and Bengaluru FC is scheduled for 4.30 PM IST (4 PM local time) and will be telecast live on the Star Sports Network. 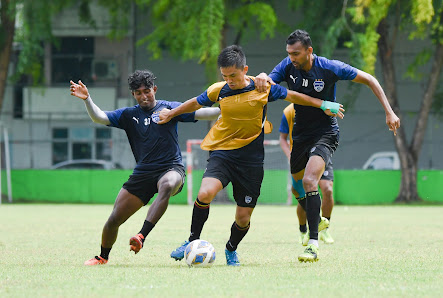 Posted by diegostrikes at 1:27 PM