FCBU Media
FC Bengaluru United (FCBU) have added four new players to their squad, as part of their preparations for the 2021/22 season. Ahead of the much-awaited Durand Cup, the BDFA Super Division Champions have signed up striker Subhash Singh and midfielders Sanju Pradhan, Denil Rebello and Bedashwor Singh.
The 31-year-old forward Subash Singh is a seasoned I-League campaigner, having played for various clubs including Air India, East Bengal, Salgaocar, Pune FC, Shillong Lajong, Bharat FC, Mohun Bagan, NEROCA FC, Real Kashmir and Mohammedan SC. He was also part of the Indian Super League side Mumbai City FC for the 2014 season.
"I am excited to be part of the United journey," said Subash. "I strongly believe that we have the team - both in terms of personnel and spirit - to put in a great showing at the Durand Cup and qualify for the I-League as well," added the versatile striker, who has also featured at the U-19 and U-23 level for India.
Bolstering the midfield will be Sanju Pradhan, who brings in valuable I-League and ISL experience. The 31-year-old player joins FCBU from RoundGlass Punjab. Having started his professional career with Air India, Sanju went on to play for East Bengal in 2008 - he played four seasons and was part of multiple trophy winning campaigns for them. He made 72 appearances for Air India and scored 10 goals. He was part of the ATK side that clinched the inaugural ISL title in 2014. The midfielder has played 55 ISL matches playing for various ISL clubs such as NorthEast United, FC Pune City and Mumbai City FC.
"I am excited about sharing my experience with the younger players in the team," said Sanju. "The club is run extremely professionally, and I am really happy to be a part of it. I am looking forward to good game time and performing to my potential."
The third signee is 23-year-old Denil Rebello who started his youth career at Salgaocar FC and played for their senior team in the 2019-20 Goa Pro League season. He was then signed by fellow Goan side Vasco Sports Club for the 2020-21 season.
FCBU have also roped in rising star Bedashwor Singh. A product of the AIFF Elite Academy, Bedashwor spent his youth days with ISL club Chennaiyin FC as a developmental player. During this time, he was loaned out to Minerva Punjab and Fateh Hyderabad in the 2016-17 and 2018-19 seasons respectively before joining I-league side TRAU FC in 2019, where he spent two seasons.
Commenting on the new signings, Richard Hood, Head Coach, FC Bengaluru United said "Sanju comes to us with a massive reputation - he has captained important teams and knows what a winning dressing room is like. He will bring us a lot of stability in building our attack and his track record of creating chances and finding gaps into the opponent's final third is the primary reason the staff made sure that we secured him as soon as his availability was brought to our attention. Subash is an explosive athlete who has the ability to beat players and destabilize defenses with skill and speed while being a proven scorer of goals. Having joined our season from day one, we see that he takes his training hours seriously and is committed towards continuous improvements, which has rubbed off on others." 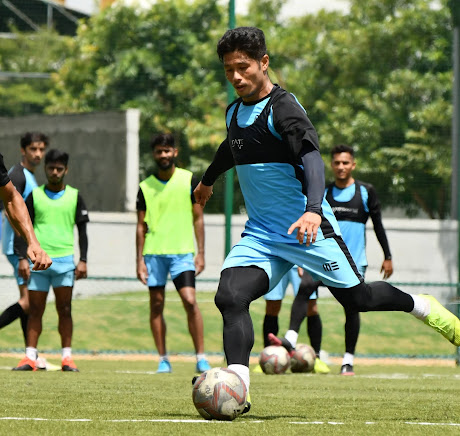 Posted by diegostrikes at 5:56 PM