Bengaluru FC Media
Bengaluru FC Coach Naushad Moosa said that his side were focused on tackling each game at a time, ahead of their quarterfinal clash against Army Green, set to take place at the Vivekananda Yuba Bharati Krirangan, in Kolkata, on Saturday. The Blues, who booked their spot in the knockouts by virtue of topping Group C, face Army Green, who finished second in Group B.
“The final group game against the Indian Navy was a good learning experience for the boys. We allowed the opposition to bring the game to us in the first half, and that gave them a two-goal lead and I told my team during the break that they had to pull together as a unit and work hard. They responded well to turn things around in the second period,” said Moosa, speaking to the press ahead of the fixture.
Bengaluru began their campaign with a 2-0 win over Kerala Blasters, which was followed by a 2-2 draw against Delhi FC. The win over Indian Navy on Tuesday allowed Moosa’s side to finish the Group unbeaten, with seven points from three games. Army Green, meanwhile, lost 2-0 to FC Goa in their opener, before wins over Jamshedpur FC (3-1) and Sudeva Delhi FC (1-0).
Bengaluru have goalscorers across the pitch, with seven players within Moosa’s squad finding the net in the group stages, scoring nine goals among them. “It’s good that we have had several players finding the back of the net. It makes selecting the team difficult, and that’s always a good thing for a coach. The boys are hungry to do well and to go as far as possible in this competition. But that doesn’t change the fact that it will be tough for us, so we will have to be at our best,” Moosa added.
Army Green meanwhile, have scored four goals in the tournament, of which striker Deepak Singh scored three. “We’re expecting another physical game on Saturday, and since kick off is at 2 pm, the conditions are going to be even more challenging. The boys need to make sure they begin well and hold strong. We’re not thinking about the semifinal or the final just yet. The most important game for us is the next one, and that’s the quarterfinal against Army Green,” said Moosa.
Kick-off in the clash between Bengaluru FC and Army Green is at 2 pm on Saturday, September 25th, and will be streamed live on the AddaTimes website and app. The winner of this encounter will face FC Goa in the semifinal. 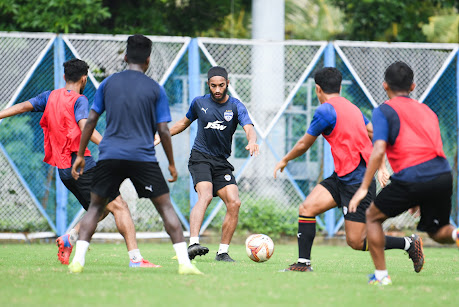 Posted by diegostrikes at 5:12 PM