Rajasthan United will take on FC Bengaluru United in the second match day of Group A in the Hero I-League Qualifiers 2021. A crucial three points will be at stake for either side in the match, scheduled to kick-off at 3:45 PM IST on 6 October, 2021. The match will be streamed live on the Hero I-League’s official Facebook page.

FC Bengaluru United is coming into this competition on the back of a good showing in the Durand Cup, where they reached the semi-final stage. FCBU have qualified for this competition after winning the BDFA Super Division in Karnataka earlier this year.

Club Captain Dharmaraj Ravanan believes that the team is ready to leave a positive impression in this competition. He said in a virtual pre-match press conference, “Our goal at FC Bengaluru United has always been to qualify for the I-League, and we have been preparing with that goal in our mind for the last two months. Tomorrow, we intend to go all out and get three points.”

Head Coach Richard Hood commented on the state of the squad at his disposal for this season. He said, “We are carrying some momentum into this tournament from the Durand Cup. I think the clarity and understanding that we showed in our play at the Durand Cup is what we want to replicate and improve upon in this competition. We are high on confidence and self-belief at the moment, and that’s what we need to carry us into the I-League. That has been our goal all along our journey.”

Speaking about the opposition for the match tomorrow, Richard Hood said, “I think we have a lot of respect for each opponent we come across, and by respect we mean approaching the game in the right way where we can never underestimate the qualities of our opposition and always aim to perform at a high level. We are certainly aware that we are facing a team tomorrow who have won their previous game, and it will be a tough match for sure.”

Rajasthan United will look to carry their winning momentum to this crucial encounter, having bagged all three points against Ryntih SC in their opening game of the campaign. The side from Rajasthan will approach this game with the confidence of having scored three goals in their opening match of the competition. To get through to their objective of reaching the I-League First Division, they will have to negotiate their next encounter with the ‘home side’ of the Hero I-League Qualifiers in FC Bengaluru United (FCBU).

Head Coach Vikrant Sharma believes that the lack of a home crowd due to the health and safety protocols will negate the home advantage that FCBU may otherwise have had. Speaking ahead of the game in a virtual press conference, Vikrant Sharma said, “I don’t think that our opponents will have any home advantage as there won’t be a crowd, but they have other strengths. They have an experienced side, with senior players who have played at ISL and I-League level before. We will work to put our best foot forward and see what happens in the game tomorrow. We are preparing to face them and are ready for the challenge.”

RUFC skipper Akeem Abioye, who turned in a solid performance in his side’s win in the opening encounter, remained in good spirits ahead of his team’s match tomorrow. Akeem encapsulated the mood in the team’s dressing room following the positive result in their last outing.

“We are feeling good and positive because we managed to get the three points in the last game. In the first match, the most important thing is to just win and get the three points, and we did that. We are thankful to the coaching staff and management for motivating us and preparing us for the game in the right manner,” he said.

Speaking about tomorrow’s opposition, Akeem added, “I have seen them (FCBU) play a few times and I know that they are a good team, but personally, I don’t like to think or know about the opponents before a match. I like to focus on my own game and showing what I can do. I trust the coach’s instructions for me and think that the coach helps us a lot to prepare for the game, so I am ready to do anything that is asked of me in the field of play. FCBU are a good team, but so are we, and we want to give our best tomorrow.”

Lining up against RUFC tomorrow will be FC Bengaluru United, who are preparing to play their first match of this year’s Hero I-League Qualifiers campaign. The Bengaluru outfit is only one of two teams who have played in this competition before. FCBU will be looking to go one better from last year and hopefully seal their place in the I-League First Division this season.

The result in this match tomorrow is bound to play a key role in the final outcome in Group A of the Hero I-League Qualifiers. 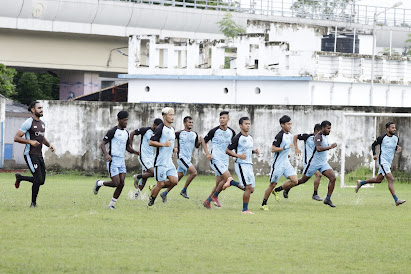 Posted by diegostrikes at 12:16 AM