Karnataka through to Santosh Trophy final round

Karnataka scored a convincing 2-0 victory over Telangana to finish with an all-win record and sail into the final round of the 75th Santosh Trophy football championship. In another game in the morning of this group, Tamil Nadu scored a 1-0 win over Andhra Pradesh.

It was a virtual final between Karnataka and Telangana as both sides had a chance to qualify, though Karnataka only needed a draw. Karnataka scored early in the 10th minute - a marauding run by Vignesh Gunashekar that was illegally halted by two Telengana defenders just inside the box, and referee Mithun Kundu pointed to the spot.

Midfielder Solamalai scored and the hosts were 1-0 up. Telangana fought bravely though Karnataka enjoyed a better share of the exchanges. It took them 74 minutes to get their second goal. Bavu Nishad put home a rebound to help hosts Karnataka finished with 9 points from three games. 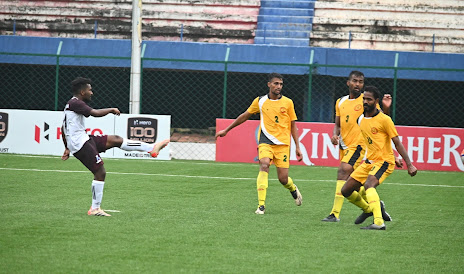 Posted by diegostrikes at 7:33 PM