Bengaluru FC Media
Bengaluru FC made it two wins on the trot, with a 7-1 defeat of ADE FC in the BDFA Super Division League, at the Bangalore Football Stadium, on Friday. Rahul Raju scored twice, in a game that the Blue Colts dominated from start to finish.
Sandesh Bhoite made two changes to the side that faced ASC&Center just three days ago, with Vinith Venkatesh and Manik Baliyan returning to the starting eleven. It took just a minute for Bengaluru to take the lead when Manish Chaudhary’s low cross into the box was finished by Rahul.
Seven minutes later, the Blue Colts doubled their lead through Lalremtluanga, who nodded home a free-kick from Omega Vanlalrhuatluanga with nine minutes on the clock.
Defensive frailties saw ADE concede two more in the space of two minutes. Under pressure, ADE ’keeper SK Sadekuddin conceded possession in a dangerous area, allowing Edwin to score the third goal, and only moments later Rahul poked home the fourth.
Bengaluru added a fifth goal before the break when Omega’s cross was deflected into his own net by ADE defender Suyash as the Blue Colts took a commanding 5-0 lead into the tunnel.
Picking up where they left off, Lalthangliana added his name to the scoresheet after being played through by Jagdeep with a clever pass over the ADE backline. The hosts were awarded a dubious penalty just past the hour mark allowing Sachin to slot past Baliyan to make it 6-1.
Bhoite rang in changes as Monirul Molla, Yaphathoi Magsatabam and Shighil NS took the field in place of Vinith, Edwin and Omega. Moments later, Abu Swalih came on to replace Lalthangliana, making him the youngest ever player to play for the Bengaluru FC Reserves at just 15 years of age.
Bengaluru scored a seventh goal on the night when Yaphathoi slipped through the defence, allowing him to finish past Sadekkuddin and make it 7-1. Shighil had a chance to find an eighth in the final minute of the game, but the midfielder’s shot from Abu’s cross went wayward.
The Blue Colts next face Bangalore Independents at the same venue, on December 13th. 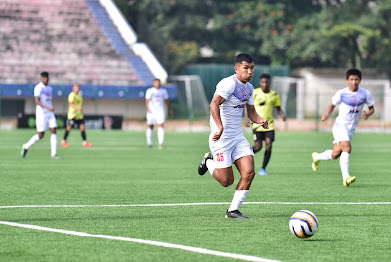 Posted by diegostrikes at 6:04 PM