AIFF Media
Coached by Bembem Devi, Manipur dominated their supremacy in women’s football by successfully defending the Hero Senior Women’s National Football Championship crown. In the final played at the EMS Stadium, Kozhikode yesterday, December 9, 2021, they beat Railways after a dramatic penalty shootout.
After a dearth of goal-scoring chances in regulation and extra time, the match went to penalties with the scores at 0-0. Manipur goalkeeper Okram Roshini Devi produced three saves to give her side their 21st title at this level.
Similar to previous editions, Karnataka had an unsuccessful outing losing all three group matches. The state girls were placed in Group D along with Jharkhand, Goa & Delhi.
With KSFA successfully hosting Women’s League for the last few seasons and widening the league across multiple divisions, we have to start producing better results.
Results
• Jharkhand 1 Vs Karnataka 0
• Delhi 2 Vs Karnataka 1
• Goa 3 Vs Karnataka 0 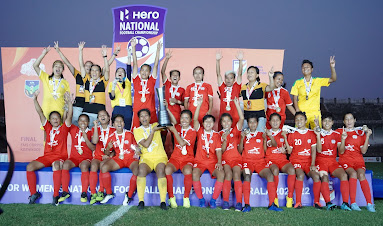 Posted by diegostrikes at 1:51 PM