Bengaluru FC Media
Bengaluru FC returned to winning ways in the BDFA Super Division League with a convincing 4-0 defeat of ASC & Center FC at the Bangalore Football Stadium, in Bengaluru, on Tuesday. Goals from Rahul Raju, Jagdeep Singh, Lalthangliana and Robin Yadav sealed the points for the Blue Colts, who now have eight points from five games in the Division, with two wins, two draws and one loss.
The Blue Colts started the game on the front foot, dominating proceedings for the first 20 minutes, coming close on multiple occasions. A flurry of corners went begging as Bengaluru pushed forward in search of an opener. ASC had a chance of their own in the 32nd minute when Rajak Ahamed took a swipe from distance, but Dipesh Chauhan watched it go wide of his frame.
Ambling towards the break, the Blue Colts broke the deadlock when Lalthangliana’s shot came off the post and fell kindly for Rahul. The striker controlled the rebound and lifted it into the roof of the net to give the Blue Colts the lead.
ASC & Center came close to finding a response when a freekick found Saroj Rai unmarked in the box, only 15 minutes into the second period. His header towards goal, however, was collected by Dipesh without fuss. Bengaluru doubled their lead when ASC ’keeper Mutum Raj Singh came off his line in an attempt to dispossess Rahul. The striker turned away from goal and set up Jagdeep, whose shot from outside the box floated its way home to double the Blue Colts’ advantage.
Bengaluru picked up the pace in the final ten minutes of the game as Bhoite sent on Monirul Molla and Vinith Venkatesh in place of Edwin Rossario and Rahul. Lalthangliana found the net soon after and on the break after Omega Vanlalrhuaitluanga’s inch-perfect pass fed the striker through. Lalthangliana made no mistake, rounding the keeper before rolling the ball into an empty net.
The Blue Colts added a fourth on the night on the stroke of 90 minutes when Jagdeep turned provider, lifting a cross over the ASC defence for Robin to attack and nod past Mutum Raj to make it 4-0 and seal the points. 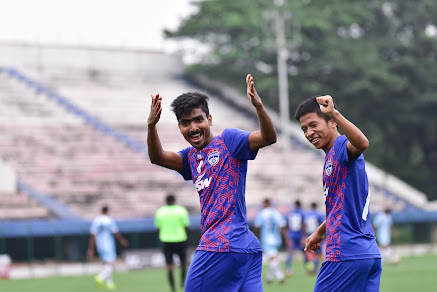 Posted by diegostrikes at 8:30 PM