Eagles rally back to win against Bengaluru FC

Bengaluru FC went down for the first time in the 2021-22 BDFA Super Division League, with a 2-1 loss to Bangalore Eagles at the Bangalore Football Stadium, on Thursday. Strikes from Cletus Paul (45’) and Harpreet Rulbir (86’) saw the Eagles claw their way back and claim the points, after an own goal from Ajith Arasu (35’) had given the Blues the lead in the first half.

Sandesh Bhoite made two changes to the side as Macarton Nickson and Monirul Molla replaced Thoi Singh and Bekey. The backline was marshalled by Harpreet Singh and Robin Yadav while Biswa Darjee and Edwin Rossario were tasked with controlling the proceedings in midfield once again.

The Blue Colts dominated the opening half hour but failed to capitalise after a flurry of missed opportunities, with shots from Lalthangliana and Omega being met by former BFC custodian Shain Khan Chilappuram for the Eagles.

Five minutes past the half hour mark, Omega’s looping cross fell to Eagles defender Ajith Arasu, whose attempt to clear the ball was nodded past his own 'keeper to give the Blue Colts the lead.

However, miscommunication in defence allowed former Blue Colts striker Cletus Paul to score the equaliser for the Eagles only ten minutes later. Jagdeep Singh and Harpreet Singh clashed with each other, conceding possession in a dangerous area, and Paul finished past Dipesh to make it 1-1 on the stroke of half time.

Bengaluru looked to the bench as Rahul Raju was brought on for Molla in the second period. The Blue Colts had their first big chance 20 minutes later when Omega and Lalthangliana exchanged passes before the latter's looping cross into the area. The header came in from Macarton, but could only find the woodwork.

After a second half that ambled in cagey fashion, a darting run from another former BFC man in Jacob John down the left flank saw him get past Jagdeep and send in a pin-point cross for Harpreet Rulbir, who tapped home from close range to give the Eagles the lead in the dying embers.

Bengaluru would push forward and Lalthangliana's shot on the volley in added time was the closest they came to an equaliser, but it deflected just off target in what was the last action of the game.

The Blue Colts are back in action on December 6th, when they face Young Challengers FC at the BFS. 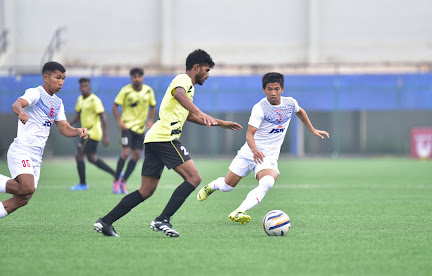