FC Bengaluru United were held to a 0-0 draw by Jawahar Union in the ongoing BDFA Super Division League 2021-22. While FCBU played attacking football and had a few chances, they failed to convert any of them.

The defending champions began aggressively, taking control of possession right away. FCBU looked to create openings and attack while JU looked content to sit back and play the defensive game. This was the trend that continued right through the first half. One of the attacking plays by FCBU was a corner taken by Asraf Mondal that was successfully dealt with by the JU defence - this in turn was volleyed by Batskhemlang Thangkhiew only to have it blocked by the JU defence again.

The second half mirrored the first half – try as they might, FCBU were unable to penetrate the JU defence and close any of their attempts. Some of their closest chances came in the dying minutes of the game, a cross from Subash Singh on the right set up a clear shot for Luka Majcen, only to see the Slovenian miss an easy header chance; Denil Rebello’s powerful shot on goal was blocked by the JU goalkeeper. 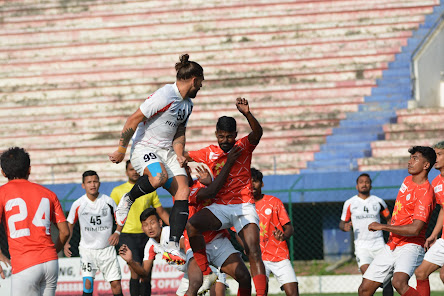