Attacker Thoi Singh put on a show at the Bangalore Football Stadium on Monday, as his Bengaluru FC side ran out 4-0 winners over Bangalore United FC, in the BDFA Super Division League. While Thoi found his name on the scoresheet twice, Monirul Molla and Omega Vanlalhruaitluanga added two more to seal the points for the Blue Colts.

The Blue Colts started the game on the front foot, creating chances aplenty in the early stages. The opening goal came only ten minutes in, when the ball fell kindly to Thoi in the box and his low driven shot had too much on it for BUFC custodian Nishit Nair to handle as it slipped through his grasp to give the Blue Colts the lead.

Bengaluru continued to pile the pressure and almost doubled their lead when Harpreet Singh nodded the ball home from a well worked set-piece, only for it to be ruled offside. Soon after, Thoi was found in the box by Rakesh Likmabam whose low cross was converted by the winger on the bounce to make it 2-0 in the 33rd minute.

Thoi continued to impress, turning provider when he ran past a number of BUFC defenders down the left flank before sending in an inch-perfect cross for Molla, who finished with aplomb at the stroke of half time.

On the other side of the break, Bengaluru continued to push and came close in the opening stages when Shighil ran at the BUFC defenders and chipped a shot goalward, only to be pushed away by Nishit. The Blue Colts were gifted a fourth when miscommunication in the BUFC box allowed Omega the chance to pounce and bury his strike past a hapless Nishit.

Striker Rahul Raju had the opportunity to make it five for the Blue Colts in the last ten minutes of the game, but his shot was dragged just wide off the post keeping the score at 4-0.

The Blue Colts next face Young Challengers FC at the same venue, on Thursday, December 23rd. 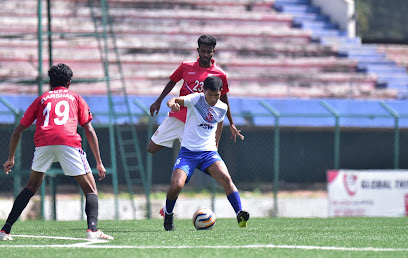 Posted by diegostrikes at 10:47 PM