Karnataka caused another major upset as they pipped defending champions Services 1-0 in a Group B clash of the Hero 75th National Football Championship for Santosh Trophy at the Manjeri Payyanad Stadium in Malappuram on Thursday, April 21, 2022.

The winner was scored in the first-half by Ankith P and the result meant Karnataka got their revenge on Services after the defending champions had gotten the better of the side from South India in the semifinals of the previous iteration of the tournament in 2019. Services, who have now lost twice, have a mountain to climb if they are to make the last four.

Both coaches revealed that they wanted their team to attack from the word go. And that seemed evident as it was a see-saw battle in the first half. While Karnataka preferred to take the aerial route, Services opted to play grounded passes.

The first chance of the match fell to Karnataka. A move down the right saw Kamalesh P attempt a cross. It seemed to strike the hand of a Services defender and the ball rolled towards Sudheer Kotikela, who failed to direct the ball goalwards. The Karnataka players appealed for a handball but referee Pratik Mondal waved play on.

That sprung Services into action. Liton Shil had two long range attempts, but both were gathered easily by Karnataka goalkeeper Jayanthkumar Krishnamurthy.

Karnataka tried to play out from the back on a couple of occasions, and one such attempt almost ended in disaster. Moirangthem Ronaldo Singh intercepted a loose back pass and bared down on goal. His attempt, however, was straight at Jayanthkumar Krishnamurthy who saved the blushes of his teammate.

Services kept pressing hard for the first goal and it should have arrived in the 28th minute. Some fine build-up play, which included a clever dummy from Vivek Kumar, meant the ball landed at the feet of Liton Shil who had the goalkeeper at his mercy. He tried to open up his body and place the ball but Jayanthkumar Krishnamurthy was ready and made a fantastic save to ensure parity.

Liton's gilt-edged chance was followed by a sucker punch from Karnataka. Against the run of play, Bavu Nishad TP put in a delightful cross from the right which was met by a fine header from Ankith P. He had a lot to do from a difficult angle but his header looped over the keeper to hand Karnataka the lead going into the break.

Services coach Priya Darshan must have had some stern words to tell his players and they started the better of the two. In the very first minute after the restart, Pintu Mahata released a through ball towards goal with Liton Shil in a foot race with the keeper. Jayanthkumar Krishnamurthy won the race and claimed the ball at some personal cost.

Moirangthem Ronaldo Singh, who was operating from the right in the second half, won Services' first corner of the second half which yielded another half-chance. A smart flick at the front post by Vivek Kumar could not be met by Liton Shil. And that proved to be his final contribution as he was substituted.

Substitute Dip Majumdar had the chance to make an immediate impact. Tongbram Krishnakanta Singh's cross from the left was met by an unmarked Dip Majumdar who failed to keep his shot down.

Karnataka's defenders held their shape well, defended deep, and tried to play on the counter. That meant Services had to rely on long rangers and crosses as they desperately tried to look for the equaliser. Substitute Deepak Singh had a half-chance as he crept in unmarked from the right but failed to direct his header goalwards.

Services' sustained pressure almost bore fruit in the 86th minute. A cross from the left was met by Vivek Kumar who headed it back towards the danger area with the goalkeeper woefully out of position. Defender Amal Das met the ball sweetly with his right foot and the ball was heading towards goal but Pavan S made a brilliant goal line clearance.

That proved to be the final chance of the game and Karnataka players celebrated a famous victory. The result meant Group B remains in the balance. Karnataka, with two wins under their belt, will face Manipur next in their bid to qualify for the semifinals. Services will be hoping to make amends and get their campaign back on track in their next encounter against Odisha on Monday. 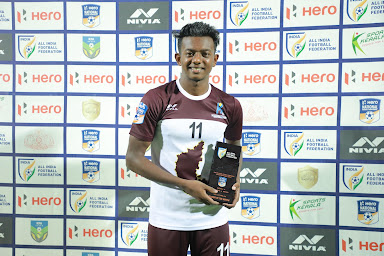 Posted by diegostrikes at 11:00 PM