Kickstart back to winning ways against Odisha Police

Kickstart FC picked up a convincing 2-0 win over Odisha Police in the Hero Indian Women’s League 2022 on Monday, May 2,2022 at the 7th Battalion Stadium.

The Karnataka based club were on the front foot right from the beginning. They came twice close to scoring but Phanjoubam Nirmala Devi and Thingbaijam Babysana Devi could not capitalize on the opportunities.

In the 29th minute, Asem Roja Devi found a breakthrough and pulled the trigger from close range. However, the referee blew her whistle for offside and the scoreline remained unchanged.

Before the half-time whistle, Roja Devi, Babysana Devi and Lochana Munda all came close to scoring, but missed their target by a whisker. Following the restart, Kickstart finally took the lead via Irom Prameshwori Devi in the 54th minute. The forward drove a shot from close range and found the back of the net to make it 1-0.

In quick fire succession, substitute Yangoijam Kiranbala Chanu made it 2-0 for Kickstart FC. The forward low shot from inside the box could not be saved by Odisha Police goalkeeper Rajeswari Das. At the hour mark, however, Das went on to make a wonderful save off Yumlembam Pakpi Devi’s close range shot.

Odisha Police could not come back with any goals before full time and the game ended 2-0 in Kickstart’s favour. 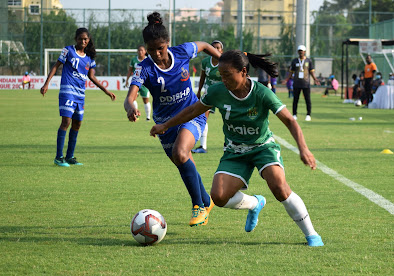 Posted by diegostrikes at 10:11 PM