Goals in either half from Sunil Chhetri (23’) and debutant Roy Krishna (56’) gave Bengaluru FC a 2-1 win over Jamshedpur FC in their opening match of the 2022 Durand Cup, at the Kishore Bharati Krirangan, in Kolkata, on Wednesday. Defender Rishi (62’) pulled one back for the Red Miners in the second half, after Hira Mondal was sent off for a second bookable offense.

Earlier, Grayson handed debuts to full-backs Mondal and Prabir Das, in a Blues’ eleven that had a midfield trio of Bruno Ramires, Suresh Wangjam and Danish Farooq. Chhetri started in attack, flanked by Leon Augustine and Udanta Singh.

The Blues began on the offense and almost found the net in the opening minute when Leon, who skipped past a challenge, sent a low cross to find Farooq unmarked in the area. However, the midfielder’s first-time attempt was skewed wide of the mark. Moments later, Farooq saw another shot from an Udanta pass saved by Jamshedpur goalkeeper Mohit Singh Dhami before the latter’s effort on the rebound was blocked away.

Bengaluru scored the opener in the 23rd minute when Chhetri found himself unmarked in the area to plant an inch-perfect header from a Das corner past Dhami. The hosts had a chance of their own from a set-piece only minutes later but Farooq managed to clear away after a scramble in the Bengaluru box.

Despite several chances from open play, the Blues couldn’t add to their lead as the sides went down the tunnel with the score at 1-0. Into the second period, Grayson rang in two changes as Aussie defender Aleksandar Jovanovic and Krishna came off the bench for their debuts, replacing Ramires and Alan Costa.

Only ten minutes on, Krishna and Chhetri linked up in attack to double the Blues’ lead. Chhetri, running onto a pass from midfield that Krishna had let roll, saw his backheel fall to the Fiji international, who pushed it past the ’keeper and scored without fuss.

The Blues’ two-goal cushion, however, was short lived as Mondal was given his marching orders for a foul on substitute winger Tapan Halder. Vikash Singh’s take from the resulting set-piece was turned home by Rishi to pull one back for Jamshedpur.

Despite the deficit in personnel, Bengaluru continued to push forward for a third goal, as Namgyal Bhutia and Faisal Ali were introduced to the fold, replacing Leon and Chhetri. Krishna, now playing as a lone striker, made all the right moves in attack and proved a handful throughout the closing stages as Grayson’s men claimed three points, sending them to second on the table in Group A, behind Mohammedan Sporting.

Bengaluru next face services side Indian Air Force FT at the same venue, on August 23rd, at 6 pm. 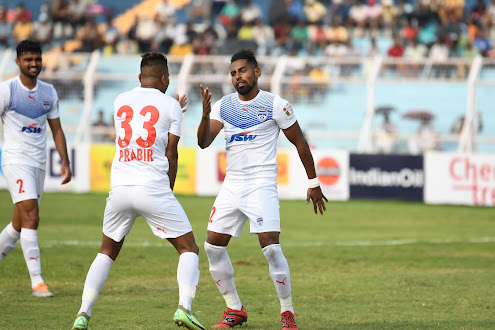 Posted by diegostrikes at 7:30 PM