Bengaluru FC suffered their  first defeat of the Puttaiah Memorial Cup against Kickstart FC, at the Bangalore Football Stadium, on Monday. The first half strike from Sharath Kumar (25’) was enough to see Kickstart pick up the victory.

In the earlier game played this noon, Roots FC defeated Kodagu FC 1-0. With Kickstart upsetting Bengaluru’s rhythm, both teams along with Roots FC from Zone B ended with 6 points. However, Bengaluru FC and Kickstart FC with a goal difference of +5 and +2 respectively made to the semis. Newbie Roots FC despite winning two games loose out by a small margin.

It was a tight first twenty minutes, with both sides trying to break the deadlock. Bengaluru and Kickstart had their chances through routine set-pieces, but failed to make it count. Kickstart took the lead close to the half hour mark with a swift counter-attack. A quick run from Akshay saw him beat his man and put in a low cross for Sharath, who buried the opportunity.

The game was fought out in the middle of the park for majority of the first half before the referee blew the whistle for the break. Into the second half, the Blue Colts came out looking for an early equaliser, and almost found it through Akashdeep Singh, who was put through on by Bekey Oram, only for the linesman to raise his flag.

The Blue Colts brought on Lalpekhlua, Lalhmingchhuanga, Ashik Adhikari and Monirul Molla in a bid to turn the game around. The substitutes pushed for an equaliser, but the Kickstart FC backline remained stubborn and kept the attackers at bay.

Bengaluru FC next face Bangalore Eagles in the semifinal, on 17th August, at the same venue. 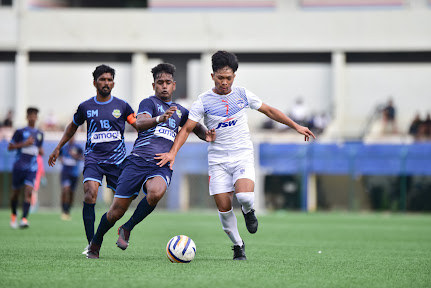 Posted by diegostrikes at 9:02 PM